In his body of work on display now at Pence Pinckney Gallery at Central Oregon Community College, interactive media and video artist Kiel Fletcher exhibits work seated in artificial intelligence and technology. Through varied independent and collaborative pieces, Fletcher seems to invite the viewer, and at times the unwitting participant, to question whether technology is a thing to revere or to be wary of. 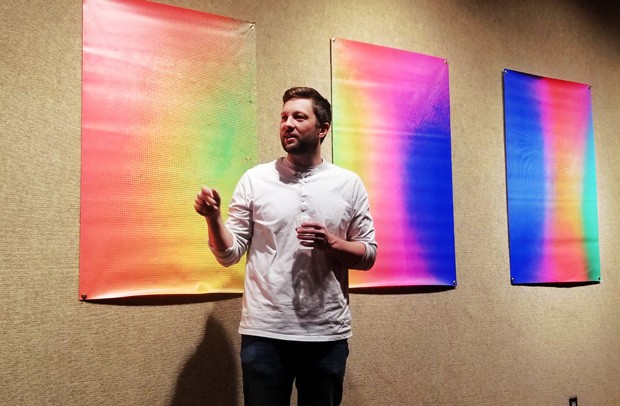 With pieces such as "Interactive," a collaboration with Ron Sparks, Fletcher reminds visitors that the words people use within earshot of a discrete microphone elicit a response—displaying images and GIFs in an unending stream, underscoring the reality that this routinely happens when people are online.

In "Quorra 1 & 2," we witness the frailty of a suicide prevention bot as it fails to track the intricacies of a basic human interaction. In discussing the work, Fletcher states, "With a lot of the work in here, I am trying to poke at the idea of A.I., artificial intelligence, in the sense that it IS artificial and is not actually that smart. These technologies can be really... impressive but they can also fall flat at the same time."

This is a show worth seeing. Its success is in poignant moments, such as the collaborative pieces with writer Jenna Goldsmith, in which poetry is read over a film of spliced images from Google Maps, or the fact that work is made with the very technology it's critiquing—exposing technology's potential for beauty and failure alike.