Meet D'Auntie Carol, your favorite art teacher from the 1970s who has nothing but love for you. In flowing caftans and a giant perm, she is not afraid to shy away from political expression and taking over the stage to fill it with psychedelic good vibes. 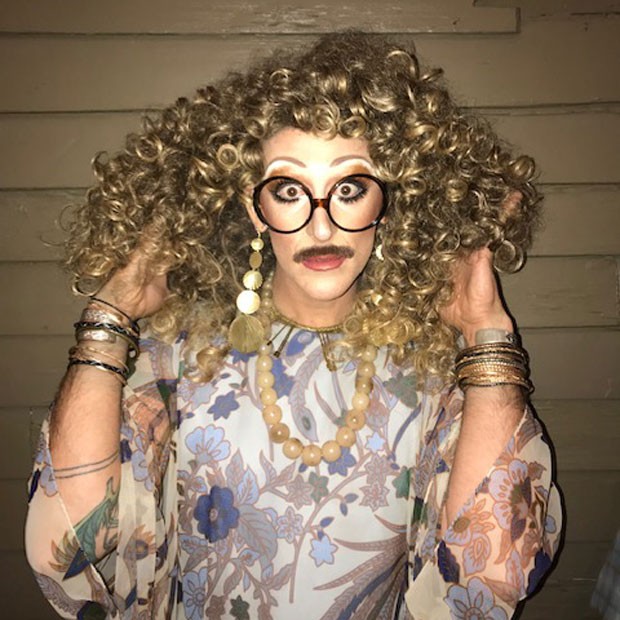 D'Auntie Carol is the creation of local artist and performer Dan Young, who most recently has been bringing her to life in the local regular drag show, "The Cult of Tuck." During Out Central Oregon's Winter PrideFest, the first week in February, you'll find D'Auntie Carol, along with other members of the drag community, hosting events at Mt. Bachelor and Seventh Mountain Resort.

Young and his husband, James Gray, moved to Bend about five years ago after spending the majority of his life in Portland. "Back in the '90s, when I first arrived in Portland, everything was a dress-up party. Even just gatherings in people's basements, you were welcome to show up however you wanted to show up," shares Young. It was this world of inclusion and creativity that sparked his own inner artistry, allowing Young to explore the world of costume and characters.

In fact, it's the world of radical faeries and gender fluidity that Young seeks to explore and expose to a larger audience. "It's not just about being pretty and throwing on a wig. There is an inherent ancestral magic in being a queer person and doing this," says Young. For him, it's more punk rock than glam—more about creating an inclusive world outside the system and sticking a middle finger up at it, and more about creating a world one wants to live in, rather than changing oneself to live in the world.

Young steps outside the traditional lip-syncing world of drag. Through collaborations with Portland-based performance artist Holcombe Waller, he's created video installations that he performs in front of, adding to the story and mystique of D'Auntie Carol. It may be surprising to see a drag queen with such an iconic mustache—but that's just part of Young's face.

"Do you have to wipe away all of your masculinity before you become a woman? For me it's just there and it's part of me," says Young.