As Bend Transitions to a City, Be Ready to Talk More about the "Big P" | Editorial | Bend | The Source Weekly - Bend, Oregon

As Bend Transitions to a City, Be Ready to Talk More about the "Big P"

For those not yet in the know, we'll supply a quick rundown of some of the parking considerations currently on the table in Bend

P is for Parking—and with Bend's explosive growth, Bendites should be prepared to spend a lot more time talking about it in the months and years to come. The conversations that are already emerging about this topic include ones covering whether we should have to pay for it, how to pay for it, where it exists, where it doesn't and also how much of it should be included when building new homes and businesses in the city—because as much as some of us wished that Bend could remain a tiny burg with some great views and quaint customs, the most recent U.S. Census is putting us at the size of a full-fledged city, complete with all the rights, responsibilities and headaches that come with it.

For those not yet in the know, we'll supply a quick rundown of some of the parking considerations currently on the table in Bend. Inside the Bend City Council's (endlessly virtual) chambers, councilors are, among other considerations, debating whether to change city code so as to relax the requirements for the number of parking spaces included on new home construction. The current code requires every home to have a minimum number of parking spaces. Affordable housing advocates say that setting aside valuable real estate for parking spots drives up the cost of housing. In theory, we'd tend to agree—except that over time, we've seen a myriad of theories thrown out in hopes of fostering affordable housing, which never seem to result in lowered prices, or an easing of our housing crunch. Were the proposed changes to actually result in more housing for lower- or middle-income households, we'd support it wholeheartedly. Whether that's actually a reality is another story. 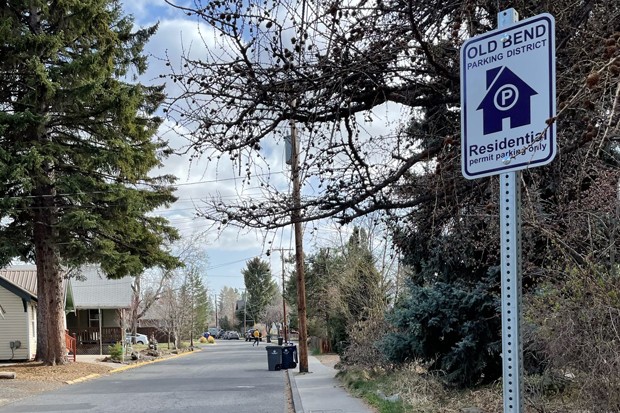 Meanwhile, councilors have recently opted to extend the life of the "parklets" that are taking up parking spots in downtown Bend, in order to give restaurants more outdoor space during the ongoing time of coronavirus restrictions. While we support this idea, rather than a scattershot approach to sidewalk-café culture, we'd rather see a real plan put in place to entirely "pedestrianize" one or more streets of downtown. A pro to this: More actual feet on the street right in front of downtown businesses. A con: We'll have to abandon our very American mindset that parking directly in front of a business is the only way to get bodies in the door. As one commenter on our website pointed out, you can park directly in front of a Walmart too—but you'll walk farther to get to the back of that store than you'd be likely to walk across the entire span of a pedestrianized zone in downtown Bend.

What should also be on Bendites' radars is the Old Town parking overlay zone, begun as a pilot program during the pandemic and miraculously deemed a "success" when everyone was quarantined and all park events were canceled. We would like to see a more robust community conversation examining what it means to keep eastsiders, northsiders, and southsiders out of our more desirable neighborhoods...or at least ask them to pay dearly to visit.

Meanwhile, there's another way to ease parking woes: To not be part of the woes at all. While not feasible for everyone, Bend is making some major investments in multi-modal transportation that make it easier and safer not to drive a car at all to get around. How many times have you driven to downtown from close by, circled around looking for parking and then complained about all the cars in your way? You're one of the cars. You don't have to be. Whether by biking or walking or taking a rideshare car, you already have options that don't involve circling around getting frustrated.

Bend is not becoming a city; it already is one. Whether we like it or not, that means city-like parking concerns, and a requirement by all of us to think beyond the status quo and to consider supporting plans and codes and approaches that prioritize people over cars. As Bend grows, we have the ability to plan our city less around the cars that get us places, and more around the people who occupy them in myriad ways. If P is for Parking, prepare to talk a lot more about it in the years to come.