"Assault at the Citadel of Liberty"

Members of Congress were evacuated from the U.S. Capitol today, after armed rioters stormed in during the process certifying electoral college votes.


"It's a strange feeling to be locked in a room that you know is not really designed to be secure." - Sen. Jeff Merkley tweet this

In a call Wednesday afternoon to Oregon media from an undisclosed location, Sen. Jeff Merkley described the scene in the Senate chamber. Before protesters rushed in, Merkley said they'd heard a "very powerful speech from Mitch McConnell," now-outgoing Senate majority leader, about the Constitution.

Fellow senators had just raised an objection to the electoral college votes filed from Arizona when Merkley said he began to hear the sounds of protesters outside. 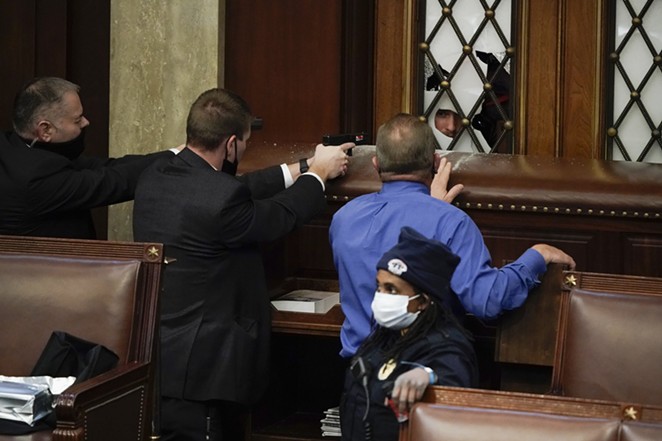 At that point, Sen. Ron Wyden of Oregon yelled "Lock the door!," according to reports from The New York Times.

There was "lots of confusion about where the keys were and how to lock the door and lock the press gallery above," Merkley said. "It's a strange feeling to be locked in a room that you know is not really designed to be secure—a lot of folks trying to check through their cell phones to find out what's going on."

In those first moments, senators got instructions first to evacuate, and shortly after, to stay put. Eventually, all senators were moved to a secure location, Merkley said. For him, the riots outside—and inside—the Capitol were rooted in the unfounded claims that the election was "stolen." Elections officials in every state have certified the November election, finding no evidence of widespread election fraud.

"When I envision a mob that is being fed bad information—but local leaders know it's bad information... but it's popular so they decide not to speak up—and then the local leaders see how strong the mob is, and they're afraid of it," Merkley said. "And then the mob starts to move toward some objective—so many people believe that something has gone wrong. The position should have been correcting the lies and conspiracy."


“What’s happening today in our nation’s Capitol is a direct assault on democracy, a riot by insurrectionists that caps off four years of Donald Trump fanning the flames of fanaticism. Every Republican lawmaker who supported his efforts to overturn a legitimate election shares responsibility for the violence at the heart of our democracy.

"All Americans must be able to elect House and Senate members safe in the knowledge that their views will be represented in civil debate here in Congress without mob rule ever squelching that discussion.

"As a steadfast defender of the First Amendment, I will always support peaceful protest even if I disagree with the views that are expressed. This is far from peaceful protest. But I thank the Capitol Police for their courage protecting all elected officials from criminals bent on destroying democracy. And I very much look forward to resuming the urgent work for our country, as soon as possible.”


In a televised statement Wednesday afternoon, President-elect Joe Biden called the riots "an assault at the Citadel of Liberty," which "borders on sedition."

"Scenes of chaos at the Capitol do not reflect a true America," Biden said, adding that the "words of a president matter," offering the ability to inspire or incite.

Biden ended his speech by saying, "President Trump, it's time to step up."

Later, in a video address on Twitter, Trump—who Wednesday morning held a rally outside the White House and encouraged supporters to move to the Capitol—continued to characterize the election as "stolen" while also telling rioters, "you have to go home now."
“What’s happening today in our nation’s Capitol is a direct assault on democracy, a riot by insurrectionists that caps off four years of Donald Trump fanning the flames of fanaticism." Sen. Ron Wyden tweet this


From his "undisclosed location," Merkley said Wednesday afternoon that he hoped to reconvene with his colleagues soon to continue the work of certifying  states' electoral college votes.

"I'd love us to be able to proceed just to defy the protesters who are outside," Merkley said. "I'm sure the wiser souls will arrange for us to reconvene after all appropriate safety measures have been taken—whether it’s tonight or tomorrow."

As for the question of why the Capitol grounds were not further secured before this vote—which, in other years, is something of a non-event for most Americans—Merkley said, "Everyone will want to know what went wrong and how to prevent it again—both sides of the aisle are saying this is a colossal failure of preparation. We’ll need to come together to find out what went wrong."

The Source also attempted to reach out to incoming Congressman Cliff Bentz, who replaced Rep. Greg Walden in representing Oregon's 2nd Congressional District on Jan. 3. Bentz, a Republican, earlier called for an investigation into the recent election. He told the Medford Mail-Tribune Wednesday that he was safe, saying,  “We are working as hard as we can, my little team, to sort through the Constitutional issues — and there are a lot. We are going to do our best to do the right thing.”