At last! A long-nosed snake! 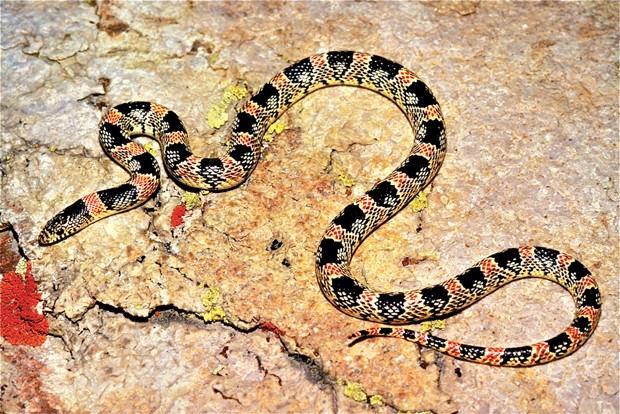 My longtime pal and devoted champion of Oregon's amphibians and reptiles recently sent me an email and photo, declaring: "LONG-NOSED SNAKE CONFIRMED IN THE OWYHEE!"

If you'd been trying to document that species in Oregon for 50 years like he has, you'd have spread the word in caps and exclamation points, too. It's a big deal because this event adds a previously overlooked species to Oregon's list of native wildlife.

St. John is a well-known regional nature/outdoor writer who specializes in herpetology. In 2002, his beautiful guidebook, "Reptiles of the Northwest" was published, and now he's busy gathering fresh information for a new edition.

As a Willamette Valley farm kid, right from the time he observed his first snake, St. John was hooked. That's not an idle statement, because I know for a fact he was doing serious reptile field studies from the time he was at least 17.

In the fall of 1965, while traveling Hwy. 97 between Redmond and Deschutes Junction with wife and kids, I was stopped by an Oregon State Police trooper. The officer was moving fast as he came up to my window. Without introduction he asked, "Are you James O. Anderson Jr.?" I said I was, and he replied, "Follow me. You have to make an emergency phone call to Salem." And away he went, red lights flashing and me following.

We pulled up to the first pay phone and he handed me a slip of paper on which was written: "Operator 30, Dr. McCallum." Dr. McCallum came on the line and said, "My wife tells me you just returned from a venomous animal symposium in Arizona. What's the newest treatment for rattlesnake bite?"

I asked him what was going on. "I have a teenager here," he replied quickly, "who was bitten on the end of his finger while reaching under a rock for a rattlesnake."

I responded, "If he was doing it on purpose and being that careless, the latest cure is to shoot him up with some anti-venom and tell him to suffer."

And that was when I had my first (sort-of) contact with that wonderful person I still work with today. The following year, I met St. John face to face when he arrived at Camp Hancock with a work party. Upon hearing his name, the light went on in my mind. "So YOU'RE the kid who got chomped by a rattler last year!"

One more short story: While working with me at the zoo, St. John and three of his herper pals took it upon themselves to return a rare ridge-nosed rattlesnake to the Huachuca Mountains that they had temporarily "borrowed" from Mother Nature to study and photograph (the species wasn't yet officially protected in 1967).  Those conscientious guys drove 1,500 miles back to southeast Arizona and released that lovely little rattler in the same spot they'd captured it the previous year.

So, now we come to the newly discovered long-nosed snake in the Owyhee Canyonlands.  I'll let guest columnist Al St. John take it from here: 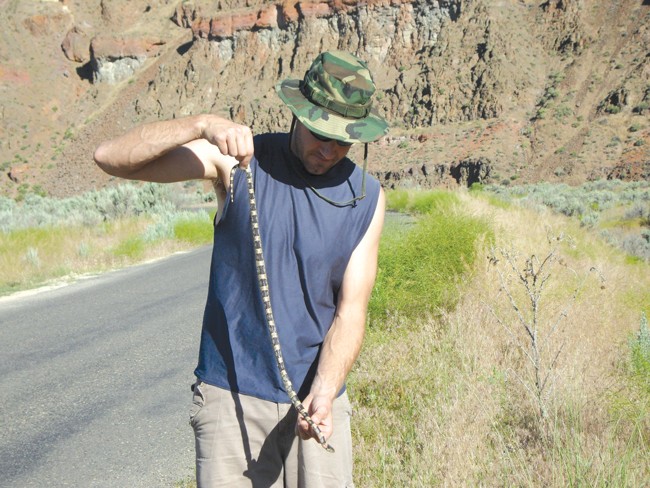 As Anderson mentioned, I'm currently compiling new information for a revised edition of my Northwest reptile field guide. Because some snakes are secretive and seldom seen, their geographic distributions are imperfectly known.  Resultantly, several of the book's species range maps feature sprinklings of question marks.  I'd love to eliminate those pesky punctuations!

In that regard, the long-nosed snake (Rhinocheilus lecontei) particularly became a personal challenge. Although totally harmless, its beautiful alternating crossbands of orangish-red, black and speckled creamy-white somewhat resemble a venomous coral snake (which isn't native to the Northwest).

The long-nose is primarily a nocturnal, burrowing reptile of the Southwest deserts, with its northernmost documented records being Nevada's Black Rock Desert and Idaho's Snake River Valley—seemingly skirting right around the southeastern corner of Oregon. After successfully finding the species in those two adjacent states and seeing how their habitat there is the same as in our Owyhee River drainage and Alvord Desert, I exclaimed with conviction, "They've gotta be in Oregon, too!"

Thus began an almost obsessive quest to confirm the long-nosed snake in my home state... for a half-century! Periodically, over that span of time, on warm summer nights I'd prowl Oregon's far-flung arid sections, flashlight in hand, hoping to nab that target species as it probed in sand with its pointy snout for buried sleeping lizards (the favored food). Or other times, after the desert sun sank below the horizon, I'd slowly drive lonesome stretches of road in the hope of encountering a long-nose. That method was repeatedly employed along the Owyhee Lake Road southwest of Adrian, because I had a strong gut-level hunch that strip of pavement might yield one.

After fruitless decades, I decided to try multiplying the observing sets of eyes by giving online crowdsourcing a whirl.  Knowing that the Oregon Natural Desert Association is actively advocating for protection of the Owyhee Canyonlands, I figured their efforts are resulting in ever more folks hiking there.

(They're professors at the University of Michigan, and until one of their fellow colleagues noticed my posting and passed it along, they were unaware the species hadn't been verified in Oregon.)

Alison excitedly emailed to say, "This has never happened to me before, but I think Dan and I may have the state record that you are looking for, without ever knowing that it was a rare find......oops! When Dan saw my face as I was reading your ONDA post, he thought I'd just gotten news that someone had died because I was so shocked. I literally have only been to that road once and never even night-cruised it.  I simply drove around that one morning and spotted a dead Rhinocheilus along the way." Alison and Dan accidentally ended up being in the right place at the right time!

I began my ONDA blog article with a quote from famed herpetologist/author, Carl Kauffeld, who once sagely opined, "Snakes are where you find them." He knew from a lifetime of field experience that locating an elusive specimen can often be a matter of pure luck.

As Alison commented in her triumphant email, "So I guess you—and Carl—are totally right. People can stumble into state records because snakes are (at least sometimes) simply where someone happens to find them!"

Congratulations and much thanks to Alison and Dan for this significant contribution; and likewise my gratitude to ONDA for providing the venue allowing this to happen.  I can now FINALLY have the satisfaction of deleting that pesky Oregon question mark on the long-nosed snake range map!