A way to protect birds from cats

Are cats cuddly companions or fine-tuned killing machines? They're both—and their owners know that. Cats that live in the wild (or are indoor pets allowed to roam outdoors), kill about 2.4 billion birds in the continental U.S. each year, according to the American Bird Conservancy, contributing to the extinction of at least 64 bird, mammal and reptile species. Their owners respond with a shrug of their shoulders, or, they state, "Oh, well, that's nature." 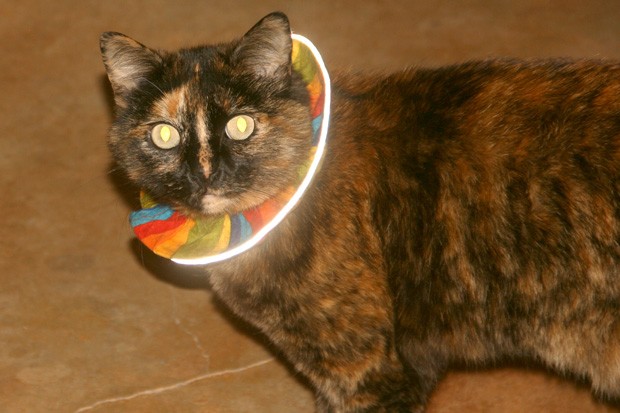 Yes, it is natural for cats to kill things, that's what cats are designed by nature to do. But it's not "natural" for domestic cats to kill indigenous wildlife just because it is there; that's the influence of man and his feline pets on the natural world.

But at last birds and other native wildlife roaming around outside homes and businesses can be safe from domestic cats. The photo at right of a BirdsBeSafe collar on a friend's cat may look awkward for it to get around in, but scientific tests have demonstrated cats are not harmed (but may be annoyed) when wearing it. The device is 87% successful at keeping cats from catching birds, according to the company, with the bright colors designed to help songbirds see cats sooner.

That dear young girl that died of the bubonic plague many years ago lives in my mind like a stick of dynamite in our local kindergarten. Her pet cat carried a dead ground squirrel it had caught into the home and a flea carrying the Black Death deserted the squirrel and jumped into the child's clothing where it eventually bit her. She came down with the plague and died.

I know the population of Belding's ground squirrels is growing exponentially, thanks to the expanding irrigated hay farms in the countryside. Farm and house cats are catching and killing ground squirrels, and it's just a matter of time before another cat brings another ground squirrel into someone's home and that abominable flea carrying the Black Death jumps into someone's bed and infects a child or an adult.

My worries about cats carrying dead ground squirrels into someone's home may be less if, yes IF, the ground squirrel reacts to that colorful collar as birds do. Here's hoping...

But it is also the reaction to birds being killed by feral cats that now comes into focus. The rules of engagement with captured feral cats are to spay and neuter them and then release them back into the wild. How about if we go one step further and how about fitting the BirdsBeSafe collar on the cat before releasing it?

Just think of the native songbirds we'll be saving.

Scientific studies have shown that part of a three-year U.S. Fish and Wildlife Service-funded effort to estimate the number of birds killed by predators, chemicals and in collisions with wind generators and windows showed that they are in the billions. Because of that, about a third of the 800 species of birds in the USA are endangered, threatened or in significant decline, according to the American Bird Conservancy.

On top of that, a report in "Nature Communications" estimates a much-higher figure than the billions of annual bird deaths previously attributed to cats. The study also reports that from 6.9 billion to as many as 20.7 billion mammals — mainly mice, shrews, rabbits and voles — are killed by cats annually in the contiguous 48 states.

The local cat owner who told me about this remarkable device was pleased with the results. "No more dead birds at my doorstep!" she exclaimed and she heaped more praise on the BirdsBeSafe collar when she said, "My cat doesn't even know she's wearing it, and if the collar gets tangled in the brush it'll just break away and the cat comes home unharmed."

You can get them at birdsbesafe.com. If our local Humane Society decides to change the rules on handling feral cats, they can depend on me to supply them a bunch of BirdsBeSafe collars. Please, for the sake of our wild birds, join me.