At the Emerald Cup, the industry brings its sparkle 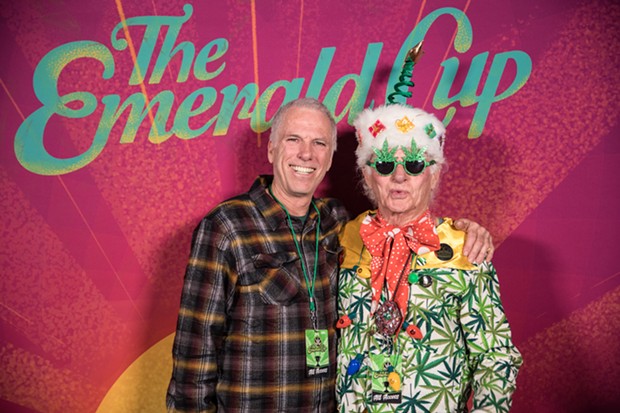 "You wanna hit this?"

"This" was a super sizer bomber: a blunt-sized joint with a line of rosin running through, turbo charged with the addition of some kief.

I stared through the thick haze of smoke and thought about the question for an uncharacteristically long period. It wasn't that I was too high, rather that I had utterly maxed out my interest in all things cannabis—talking about it, looking at it, smelling it and even consuming it.

On Dec. 8 and 9, I was in Santa Rosa, Calif. to attend my first Emerald Cup, a two-day festival celebrating Northern California cannabis growers. I had been told this was a must-attend event, but scheduling had not allowed the opportunity in past years.

The Cup is, as its name suggests, a cannabis products competition. I'm missing the gene that moves me to care about awards for cannabis, so I don't have any insight as to who won what, but congratulations to all.

I can tell you I have never in my life seen so many entries for such a Cup, displayed with museum-quality care in multiple lighted cases, showcasing row upon row of samples. I stopped taking pictures after the first three.

Both days had sold out, and I was told there were 30,000 people. If you don't do well with crowds while high, this isn't the place for you.

It was held at the Sonoma County Fairgrounds, a sprawling multi-acre space with numerous airport hangar-sized structures, recently used to house big animals after the devastation of October's NorCal wildfires. The immediate area surrounding the fairgrounds was spared, but drive a mile in nearly any direction to find blackened piles of rubble where people once lived. The contrast is sobering.

The buildings housing the Cup were broken down into categories of interest (nonprofits, science, grow equipment, etc.) There was a robust schedule of speakers as well, all of which led to a serious case of FOMO. This area was open to all attendees, and I could have spent both days there easily.

But I did not, because as I've written here, I recently acquired my California medical marijuana card, allowing me access to the much desired "215 area," featuring booths providing cannabis and consumption.

No matter how I describe this, you'll think I'm exaggerating because I was high. Yes, I was high—but I have pictures to back up my claims that this was the largest amount of consumption, products and the opportunities to "donate" for products I have ever seen, anywhere.

Several buildings filled with hundreds of booths, makeshift to baller, packed out in seemingly never-ending rows. Everything sampled was available for a "suggested donation," including concentrates for as low as $10 a gram and flower for $100 per ounce, with "deep discounts for quantity." Seed companies had gallon-size jars of the flower the seeds had produced. Smoke a bowl of a strain, and if you like it, buy the seeds. It's the most perfect model of farm to tabletop vaporizer commerce ever. Some opted to forgo the jars entirely, and had 10 to 15 pounds of various flower spread out in open turkey bags. My nose had a coating of resin by the end of each day.

I spoke with grower alliances—primarily sun-grown—who all expressed the concerns their Oregon counterparts share: continuing to be able to work with patients, over-reaching regulation, and fear of "Big Canna" destroying the craft cannabis industry.

I smoked a few pre-rolls that sucked, tried strains exclusive to California and sampled two types of Frenchy Canolli hash products. If Yoda were a French hash maker, he would be this man. It was the finest hash I've ever smoked.

It was reassuring to be among so many cannabis fans and producers, underscoring that no matter what Attorney General Jeff Sessions and his tiny-handed, dementia-ridden overlord may threaten, the cannabis industry is not retreating back into the shadows. Never again.