Avalanche Dogs to the Rescue

Skiers at the Mt. Bachelor ski resort may encounter some unexpected company while carving turns: four-legged members of the mountain's avalanche rescue team.

Many ski resorts in North America have avalanche rescue dog programs as backup insurance policies. A dog's ability to cover terrain quickly and sniff out someone caught in an avalanche is key.

"The dogs use their nose to find someone buried in the snow, and when they do, they get the best thing in their life—which might be a tug-of-war toy or a high-reward treat," said Drew Clendenen, Mt. Bachelor's avalanche dog team lead and handler for Banyan, a 7-year-old golden retriever. 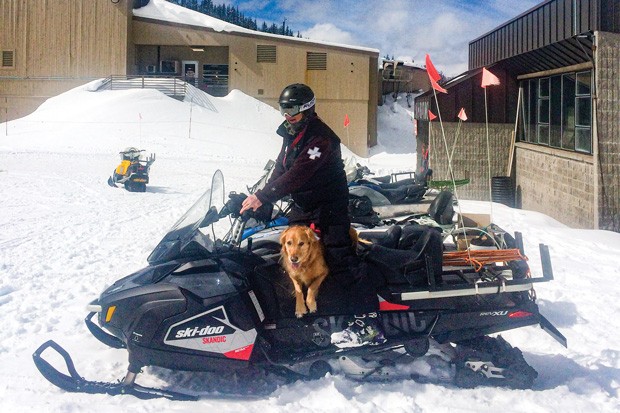 "Athleticism, intelligence and drive (ability or willingness to work) plays a huge factor in what ultimately makes for a successful working dog, avalanche or otherwise," said Jon Erickson, Mt. Bachelor's snow safety supervisor and handler for Mac, a 1-and-a-half-year-old chocolate Labrador retriever. "When selecting an avalanche dog it's best to stack the odds in your favor and get a dog from a reputable breeding program that has a consistent history of dogs free of health and genetic issues."

An avalanche dog can search an area about the size of a football field eight times faster than a 20-person search team with probe poles. tweet this

In addition to obedience training, the dogs also learn to load on and off a ski lift, ride on the back of a snowmobile or in a snow cat or rescue helicopter. The dogs and their handlers attend avalanche training courses in Utah with the Wasatch Backcountry Rescue program or the Swiss Avalanche program in Washington. Handlers incorporate their extensive knowledge of avalanche dynamics with reward-based training.

Many Western states and Canadian provinces have their own certification standards, but include the dogs locating buried "victims," articles of clothing or miscellaneous items such as skis or poles during timed trials. Working as a team, the handler will command the dog to "search" the mock avalanche area while the handler pays attention to wind direction, potential burial areas and reactions from their dog with the overall goal of several "live finds" in under 20 minutes. 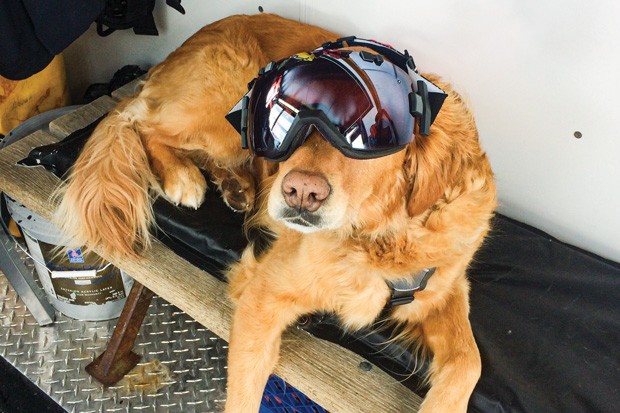 The dogs locate a pool of human scent as it rises up through the snow. If a scent is detected, the dog will plunge its head into the snow to determine if the scent intensifies. If so, the dog starts digging to get closer to the buried person.

In addition to smell, speed is also key. A 1992 Swiss study on avalanche mortality found that 90% of buried victims survived if recovered within the first 15 minutes, but only 3% after two hours. An avalanche dog can search an area about the size of a football field eight times faster than a 20-person search team with probe poles.

The avalanche rescue dog program at Mt. Bachelor started in 1991. Currently, they run a four-dog program, with at least two dogs on duty each day: Riggins, 8-year-old black lab; Mango, 7-year-old golden retriever; plus Banyan and Mac. Though Clendenen is Banyan's handler, the dog belongs to Tyler Printz, a former ski patroller who was game to keep Banyan in the program. "I pick him up when I go to work and drop him off on my way home," Clendenen said.

The old proverb of "It takes a village..." applies to kids and avalanche rescue dogs alike. "Raising and training an avalanche rescue dog requires the involvement of the entire team, not just one or two individuals," said Erickson. All of Mt. Bachelor's 39 ski patrollers get involved with the dogs as either secondary handlers or assistants during training exercises. That support also extends out to companies like Ruffwear, which supplies each dog with new uniform equipment every year. 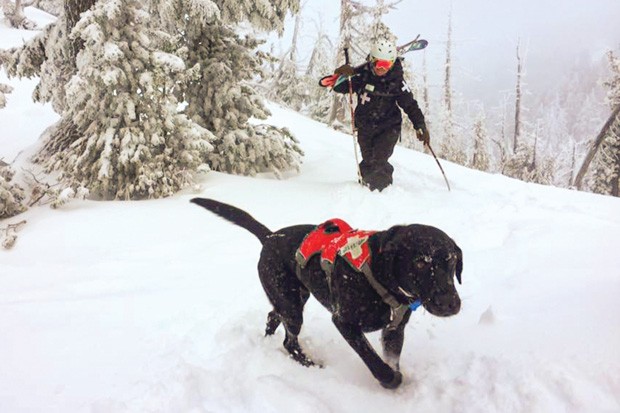 When not training or working, the avalanche rescue dogs fulfill another role as mountain ambassadors. "The dogs are also great for PR. We do dog demos for the Mighty Mites ski school programs or go into elementary classes and talk about skier responsibility code and safe ski practices," added Clendenen.

"Each patroller takes on an immense physical workload and time commitment of training and caring for their dogs, in addition to their other daily patrol duties," said Erickson, who's been a patroller for eight winter seasons. Fortunately, the dogs have only been utilized a few times to clear slide paths since the program began. "The dogs are in place as a contingency to an unforeseen incident," added Erickson.

To support the Mt. Bachelor Avalanche Rescue Dogs program, people can send in a contribution or purchase a stylish T-shirt at the Pine Marten Lodge. All proceeds go directly toward the purchase of food, insurance and certification programs for the dogs.