Made up of Hunter White (guitar), Taylor Skiles (upright bass), Aden Beck (mandolin) and Harrison Olk on banjo, the guys really brought it this time around and are prepping for a stretch of release shows. 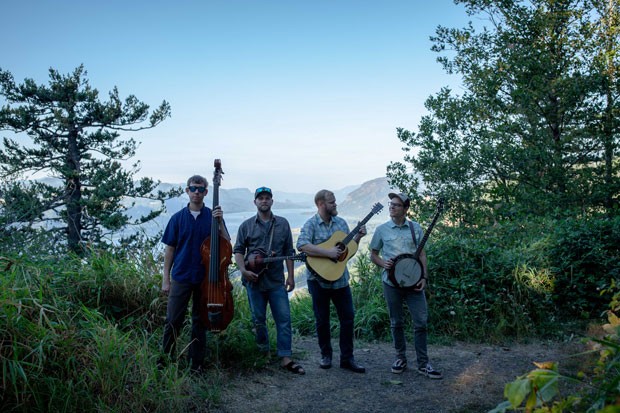 The sun is an appropriate element to represent this 15-track gem, as the album itself possesses a warm sincerity, piloted by an assortment of meandering strings. It's a prime example of well-done bluegrass—or as they call it—"newgrass." In an email, the band mentioned a focus on expanding its songwriting and arrangements from the first go-round. This includes slipping into instrumental moments more often, as a way to represent their live shows more truly.

One of my favorite moments on the album is the beginning of "Spun Like A Record." The way the tempo creeps in and unveils itself is sneaky good. It's a song meant to be enjoyed while dancing all around the room. This energy is palpable throughout "Chasing The Sun," and is something Cascade Crescendo will be bringing to the stage during its upcoming album release shows—including one in Bend this week.

From the get go you can tell that "Every Little Thing" is going to be the song that gets stuck in your head. The chorus is simple, but quick and smooth at the same time. It gets you in a summer time, windows down kind of groove. Then the power of "ELT Reprise" is heavy. It's a raw interlude with heavy focus on the harmony between the vocals within the group.

"Chasing The Sun" is just a joyful listen. Even if bluegrass isn't your thing, there's a certain quality to this album that makes it easy to listen to. It also offers some variety as Cascade Crescendo works to stretch the boundaries of the genre. There are plenty of moments to sing along to and plenty of moments to just jam to some good fiddling. The album even has a song called "Go Fiddle Yourself," believe it or not.

Anyone interested will definitely want to see these guys deliver the album live. Cascade Crescendo kicks off its release party shows at the Volcanic Theatre Pub Feb. 1.