Awakening Your Inner Hero: I Love My Doctors

In my lifetime, medical miracles have become the norm. New hearts, new kidneys, lungs, knees. And that doesn’t even begin to scratch the surface of our infinite medical blessings.

When my dad, of blessed memory, was 78 years old, he finally gave in to getting his right knee replaced. He was an athlete his whole life. Handball was the sport he played most up into his 50s, when tennis took over. Three days a week, four days a week, sometimes five. In his later years, his achy right knee became the determining factor in how often he played. I remember when he was in his mid 70s. He could only return a ball that bounced close to him—he was hobbling but still wouldn’t stop. He spent more time icing his knee than playing the sport he loved. 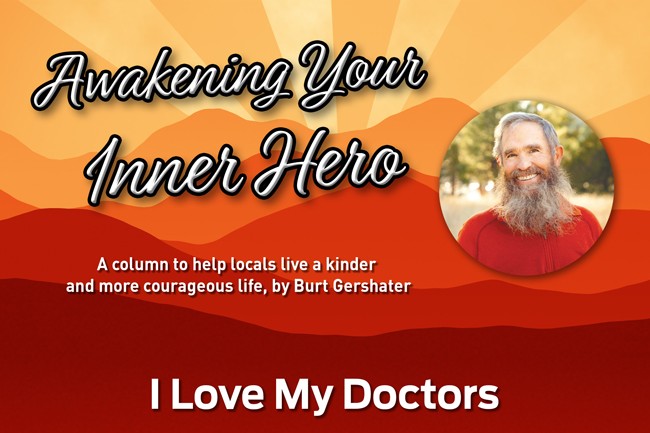 Finally, he decided to do what he had been putting off for more than five years: replacement surgery. His orthopedic surgeon initially advised him against it when he discovered Dad had had a heart attack in his mid-50s. The risk was too great for a man his age. I wasn't there, but Dad's reply is memorable, "I don't want to live if I can't play tennis!" The doctor took those words to heart and performed the surgery a few weeks later.

Dad did his physical therapy diligently and returned to playing his beloved game well within the year. At age 81, while serving in a friendly doubles match, he collapsed. The medics couldn't revive him. He and his partner were winning, five to two.

As luck would have it, I grew older, too. I was also a tennis player, runner, hiker, biker, skier dude. Active nearly every day—a chip off the old block. In my late 60s, both my knees were starting to kill me. My physical activity slowly wound down to a near halt. Just stepping off a street curb was a challenge. Sports had kept me going since I was old enough to throw and catch a ball as a toddler. Life without moving around was not in the cards for me, either.

A highly recommended orthopedic surgeon, Dr. Amber Randall, examined me and said I was long overdue for my right knee to be replaced. We scheduled the surgery and a few weeks later I had a new knee that is still a pain-free, dependable partner. Five months later, I welcomed a new left knee with Randall again leading the team. Who knew, but just over a year later, my left hip joined the party.

Where would I be today if both knees and left hip hadn't been replaced? I can't imagine. In a chair somewhere, relying on pain meds to get me through every day. Now, I have a life! No other time in the history of humankind could all this be happening. Blessedly, I am able to spend a good portion of my life cross-country skiing and mountain biking on heavenly trails all over the west.

In the early days of the pandemic, I was out on my mountain bike, hot to add a new trick to my minimal repertoire: curb hopping. Nothing fancy. Just lean back, lift up gently on the handle bars, get the timing right and glide up and over the curb. It wasn't that easy, though...at least not for me. I couldn't always coordinate the moving parts. On this day, I was feeling nervous as I pedaled toward the curb. The pandemic was brand new, I am old and on the vulnerable side, and fear was never far away. I must have frozen rather than hopped. The next thing I remember I was on the ground, in pain, blood dripping from all parts of me, and definitely in shock.

I had a Zoom counseling appointment in 30 minutes, so I rode home, cleaned up as best I could, completed the session and then began to look closer at the damage. When I rolled down my sock on my left side, I went back into shock. There was a deep, ugly, bloody tear above my ankle.

Now what? I was afraid to go to the COVID-19-challenged emergency department.

Intuitively, I called my main man, Wyatt. He's way more than just my primary health care provider. "Come on by!" was his immediate response. He cleared out his office, sanitized everything, put me on the table, scrubbed me down and sewed me up with 10 stitches. For the next two weeks, Wyatt checked me in the parking lot every day. He even gave me a shot in the butt between two cars.

I have at least a dozen more Dear Doctor stories, all the way from saving me from my heart attack in my mid-50s (sound familiar?), helping me pass excruciating kidney stones in my 30s, to helping me manage my ulcerative colitis for the past 11 years.

We all have our medical stories. Maybe not every story is a great one—but that's life. I just want you healing providers to know how grateful I am for your years of study; long, long crazy hours; holding our hands when we have needed it most—and for keeping us dancing, running, biking, hiking and moving along.

Big love to all of you.
We are deeply blessed.
Soak it in, please!