Axe and You Shall Receive | The Source Weekly - Bend, Oregon

Axe and You Shall Receive

A group of people getting drunk and throwing sharp, potentially lethal objects?! Sounds like a pretty horrible combination.

But not to John Heylin, the mastermind behind Unofficial Logging Co., the hatchet-throwing bar set to open in downtown Bend sometime in December. Stupid, maybe... but not horrible. 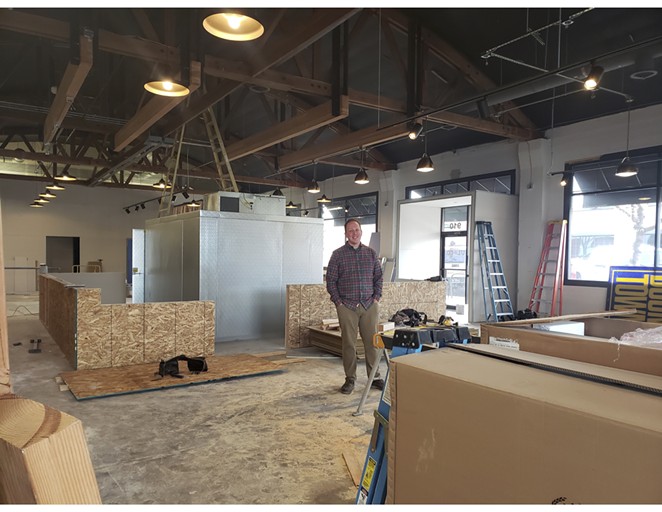 “I love stupid ideas,” said Heylin during an interview with the Source. “Stupid ideas are the best ideas, because they’re fun.” Heylin, who grew up in the rural village of Canyon, California, says he's always been a fan of the strange. After spending a few years trying (and failing) to get his bug-eating business, Chirp, off the ground, he decided to open up a hatchet bar in Bend with his friend and business partner, Matt Brobak.


Rumors around the opening date have been circulating for months, but the business owner has finally (kind of) nailed down a date. “We’re hoping for a soft opening on Dec. 18,” said Heylin. “But you know how these things go. It’s been a huge undertaking. We’ve added a cooler, built a kitchen… it’s really crazy seeing this idea come to life. I remember when it was all on paper.”

Unofficial Logging Co., located on the corner of Harriman St. and Greenwood Ave., is much more than just a bar with sharp objects flying through the air. The full-service restaurant will feature a menu designed by Lisandro Ramon, the savvy chef and business owner behind The Brown Owl. Basic pub food? Think again. “We're going to have buffalo cauliflower, pork chops, potato leek soup, Brussels sprouts, and spicy nuts to name just a few [menu items]. Plus, I'm really excited to offer a lighter option that I love, which is sliced heirloom tomato with fresh basil and mozzarella.”

The bar will feature 15 beers on tap and a small wine selection. Servers and bartenders will be cross-trained to assist axe-wielding patrons, and—of course— spot those who should be cut off before... something else gets cut off.

“Anyone can throw a hatchet with proper instructions. It's all about being consistent with throwing strength and distance from the target,” Heylin explained. We're going to have coaches/servers making sure people are being safe and know how to throw.”


Does Bend need a hatchet bar? According to Heylin, yes. “I think Bend’s definitely missing something like this. I mean, it fits the culture so well. Beer, wine, food and axe throwing. Especially with the history up here, with logging.” Yes, Bend loves beer and imminent danger. But how risky is the hatchet throwing business, really? As it turns out, the game isn’t nearly as dangerous as it might seem to the inexperienced. “At other hatchet bars, more employees get injured than patrons,” he explained. “Injuries usually occur when people do things like sharpen the hatchets without protective eyewear… stuff like that.” Still, insurance must be through the roof, right?


“I was doing an insurance quote for a taproom that we were possibly going to open, and when the insurance person was asking me questions, they asked if we were going to have billiards. I said, ‘If we do have billiards does the cost of insurance go up?’ And they said, ‘Yeah,’ and I said, ‘No but we’re gonna have hatchet throwing.’ And they said, ‘Well if it’s not excluded, it’s included.’ And that kinda caught me off guard.”

Surprisingly, this growing fad has a pretty squeaky clean track record as far as injuries and lawsuits go. In 2018, an axe-throwing bar in Michigan, Hub Stadium, temporarily lost its liquor license. The bar lost its right to serve booze for one full day, after the owner failed to mention that patrons would be chucking weapons at walls when applying for a license. Other than that, not much exists by way of violations or injuries.


Something that sets Unofficial Logging Co. apart are the paint-free targets. Instead of paint, images will be pyrographed directly onto the wood. This will allow local businesses (and locals themselves) to recycle splintered targets for firewood. There will be a total of six lanes and 12 targets, which will all need to be replaced regularly.

Unofficial Logging Co. will be open to the public, though reservations come highly recommended.