The only golden eagle cam operating in the U.S., located just north of Sisters, has been transmitting some pretty exciting footage over the last few weeks. Viewers have been witnessing what appears to be a very cruel event in the life and times of golden eagles: the starvation of one of the young. 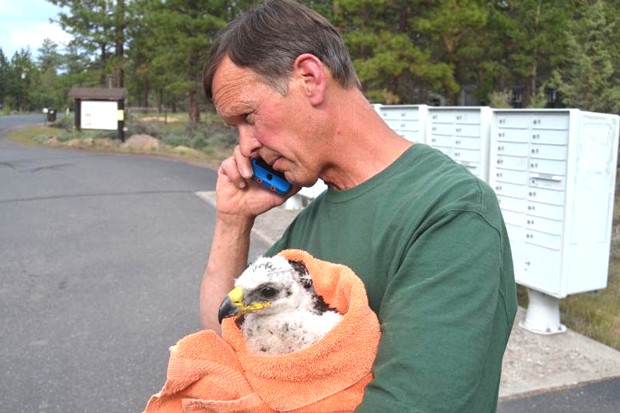 Last Monday, the younger and weaker of two eaglets fell out of its cliff nest to the banks of Whychus Creek below. The "good news" is that it is now in the care of Sisters raptor rehabber Gary Landers.

Over the many years I have been watching, banding and trying to learn more about golden eagles, that business of young being forced out of/or falling out of nests has been a mystery. It wasn't until I had the opportunity of seeing it take place that I realized it is a common practice.

It's living proof of what Charles Darwin called, "survival of the fittest," beginning when the eagles hatch out two eggs during times of scarce prey.

The number of eggs produced by the female is normally controlled by food consumed in winter. When/if the female finds plentiful food, i.e. road-killed deer and elk, or animals that fall victim to a harsh winter, she'll develop as many as three oocytes, the primitive start of an egg, which, when fertilized, will then become a zygote.

But when food is scarce—as it is this year, with the eagle's normal prey, jackrabbits—the parents favor the bigger, more aggressive chick.

During early spring, when eggs hatch, baby eagles become about the size of footballs early in their life and stand out in the nest like big, white chickens. I could easily spot them from the air when doing my annual surveys from a Piper Cub. The first time I spotted a baby dead below the nest I wondered what was going on, thinking it was the result of someone getting too close to the nest and causing the death of the chick.

But as I saw this phenomenon more during future flights, even though it was rare, I became more and more curious. Not seeing any evidence of nest disturbance, I couldn't understand why one of the young was dead. Then one year, while observing a nest on Powell Butte that a young man in the area was also watching, we combined our notes, and knowing jackrabbits were a very low number, assumed it was normal behavior to starve one nestling or push it out of the nest during shortages of prey.

Concerned viewers left hundreds of remarks on the ECAS Eagle Cam website, wanting someone to step in and remove the starving youngster. Those caring for golden eagles knew what was taking place was normal behavior, and that man had nothing to do with it; therefore, man had no business stepping in.

This time, however, things are different. Man, out of compassion, has rescued the fallen nestling, and the rehabber will keep it just long enough to get it back in good fighting shape and then return it to the nest. Hopefully, it will make it to the fledging stage, then be capable of catching its own prey.

I once spent half a day watching an adult female in the process of teaching her youngster how to catch a wild turkey. I happened upon the scene when I heard the turkey gobbling loudly each time the eaglet made a pass at it. The big bird would run for cover, shouting for help, but it was all in vain when mom finally slammed into it, probably saying to her nestling, "See! This is how it's done!"

It wasn't easy for Jim Hammond, the webcam master, along with Greg Moring, to retrieve the fallen eaglet. Hammond described it like this:

"I looked for Whychus (the name viewers and camera crew gave the baby eagle) down the canyon wall from the nest but didn't see him. I was heading down to see if there was a better view lower on the south side of the canyon when Greg, who had just come home from work, said he saw the eaglet."

Hammond then trudged back up the hill.

"Sure enough, at a place where I had seen some white but didn't think it was Whychus, there was even more black and white and it moved. Greg and I hiked down to the creek but the current was too fast and deep for us to wade across. We went back up to where we had cell coverage, called Jim Anderson at his home and Brad Chalfant at the Deschutes Land Trust for directions on how to get to the bird."

I gave Hammond the number for raptor rehabber Gary Landers.

Then, Hammond says, "Greg and I headed over to the DLT property, following Brad's directions. After hiking to the location on the other side of the creek we spotted Whychus, picked him up, wrapped him in a towel, placed him in a sack and headed back to Leslie Lawrence' place (where the camera is located)."

Landers pulled up shortly and took Whychus for rehab.

"He's not optimistic about Whychus' survival but there didn't appear to be any broken bones," Hammond said. "It is likely that the best result will be that Whychus will be kept in rehab and given the opportunity to put on weight and strength, and then reintroduced back into the nest in a week or so."

Keep watching the ECAS camera at goldeneaglecam.org for future events.