Baby, You Can Drive My Car | Film | Bend | The Source Weekly - Bend, Oregon

Baby, You Can Drive My Car

Listen, I'm about to very briefly explain the plot of a movie, and some of you are going to immediately decide never to see it. Some are going to be stoked because it sounds exactly like your specific brand of weird, and maybe the rest will come to the conclusion that I don't see a therapist anywhere near enough. All of you are right.

"Titane" is the warmhearted, sweet and disturbing story of Alexia, who, when she was a child, was in a car accident and had a metal plate put in her skull, making her feel close to and sometimes very sexually attracted to automobiles. As an adult she's a disaffected dancer, famous on the underground car-show dancing circuit, who is also almost certainly traumatized and a possibly insane serial killer. 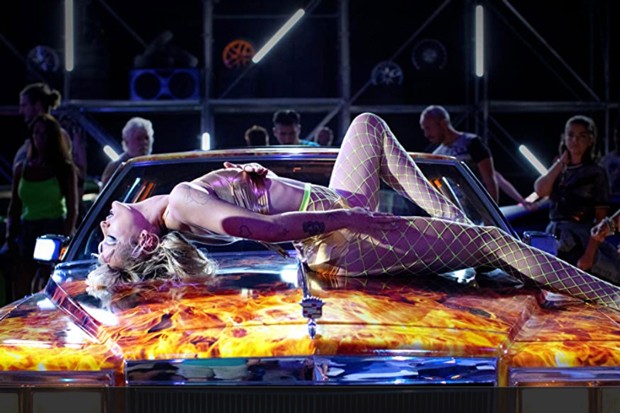 After having late-night consensual sex with a car and then murdering an entire house full of roommates, Alexia knows she must disappear before being arrested, so she partially shaves her head, fully shaves her eyebrows and breaks her nose in attempts to look like Adrien, a young boy who disappeared 10 years earlier at age seven. While fully pregnant with the car baby, Alexia takes on the life of Adrien, including moving in with Adrien's father, a steroid-obsessed fire chief so broken that he really doesn't care if Alexia is the real Adrien.

Basically, "Titane" is your average pregnant serial killer/body horror/car baby/mistaken identity movie filled with dance sequences, murders, familial bonding and bodily secretions of motor oil. The fact that the movie manages to balance between the tones of body horror, familial drama and irony-drenched thriller so beautifully is a testament to director Julia Ducornau, who, with just two features under her belt, is quickly becoming one of the most stylistically and formally interesting filmmakers working today. She seems to be the driving proponent of New Gothic French Wave, a film movement that I just invented right now and am so far the only member of record.

"Titane" won't be for everyone or maybe even most people, but those who miss the early bodily explorations of David Cronenberg and the candy-colored nightmares of Dario Argento will find something comforting here. Ducornau is already a master, packing "Titane" with jaw-dropping tracking shots, innovative compositions and setups, and storytelling that feels so provocative and visionary that it's hard not to be held breathless by her work here.

Thematically, "Titane" isn't just a movie about a serial killer pregnant with a car baby. The film breaks down with thrilling empathy some of the strictures of gender, how broken souls can heal each other, how our bodies change and how humans will always worship at the altar of the new flesh. Ducornau is fearless here and is only matched by the lead performance of Agathe Rousselle as Alexia/Adrien. Rousselle transforms in what is easily the best cinematic performance of the year so far. That performance, combined with Ducornau's direction, makes "Titane" something I find I'm looking for more and more with movies nowadays: something unforgettable.

The film is challenging in so many ways that it's easy to want to just dismiss it as "that movie where the serial killer has sex with a car," but that lurid description does the heart and soul of the film no justice. There are layers to unpack here and the film deserves the attention and time to be discussed. There's so much ugliness and beauty here (sometimes in the same frame) that "Titane" feels like a metaphor for the story itself: just as Alexia's body is shifting from flesh to titanium and chrome, Ducornau's film changes gears (heh) effortlessly between horror, drama and neon-coated dance party. Beauty is surrounded by horror just as it is in life. You maybe shouldn't watch this movie, but, if you do, I can promise that you will definitely feel something.