Mt. Bachelor invests in new infrastructure to fill in the gaps for first-time skiers and snowboarders

Mt. Bachelor's Sunrise Lodge and its nearby lifts and trails have historically functioned as a less-populated alternative to the main entry point at West Village. But this winter, the whole area will be transformed into a beginner-friendly zone open seven days a week, with two new carpet lifts, another chair, newly cut trails and an updated lodge experience catering to those who are just starting out. 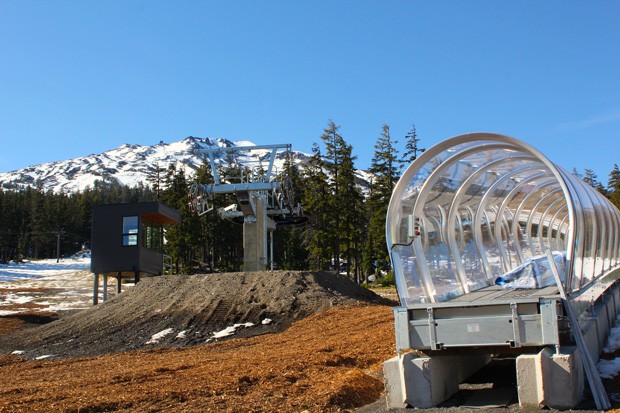 In years past, there were some gaps in the learning progression, explained Drew Jackson, director of sales and marketing for Mt. Bachelor. What used to be the first step for beginners—riding the Carrousel Chair and gliding down a densely packed open area—is now step four, he said.

"The industry as a whole is recognizing that the skier and snowboarder population is aging, and in order to continue to have viable businesses going forward for the long haul we have to continue to find ways to get new people into the sport," Jackson said. "We're somewhat challenged to get people to try it out for the first time, but the greater challenge is to get them back for the second, third, fourth and fifth times."

The redesign begins right at the Sunrise parking lot, where an additional middle parking lot right below the Sunrise Lodge adds 300 cars, a 50% increase in capacity. Guests will now enter the lodge from the back, instead of the mountain-facing side. From there, they will move in a U-shape through the basement where they can obtain passes, get fitted for rentals and sign up for lessons. Once they've geared up, they'll empty out into the Woodward Start Park, an open area with small snow ramps and stops where they can get a feel for what it's like to wear something slippery on their feet. "Zone coaches" will be standing by, offering tips and support, as well as suggesting lessons.

Beginners will then move on to "First Rays," a 70-foot-long enclosed carpet tube with a slight incline that will provide a gentle introduction to riding down. Aside from rentals, the start park and the smaller carpet are free, though customers will be required to obtain a pass inside the lodge.

After graduating to a $39-a-day beginner lift pass, skiers and riders can head over to "Lava Tube," a 300-foot carpet that provides access to progression one and two. On the far side of the tube is a very shallow half pipe for practicing turns, while riding closer to the lodge opens up an area with a few trees as obstacles. Guests can ski through the forest on some freshly cut trails after taking the new 629-foot Early Riser quad, and when they're ready, they'll hop on the Alpenglow Chair (formerly named Carrousel Chair) and navigate through Volcano Adventure Park, a set of narrower trails snaking through the woods.

When it's time for a coffee or a beer, the renovated Sunrise Lodge will now offer a little more space and a lot better flow for skiers and riders. The whole building was gutted down to the studs and now there's an updated kitchen, new restrooms, an espresso stand and an expansion of the deck area for the Sun Bar.

"The F & B staff are being a little mysterious about the new menu," Jackson said. "But it will be more palatable than the typical burger, French fry and chicken strips. The menu is one of the biggest pieces of feedback we've been getting about this lodge over the years."

Leigh Capozzi, director of brand and communications, believes these improvements to the lodge—and the 5 acres of new terrain close by—position Mt. Bachelor to offer the best learning experience in the Pacific Northwest.

"Sunrise base area has less weather and is often sunnier, along with more entry-level terrain," Capozzi said. "It creates more opportunity for progression on those first few days on the snow."

Beginners are still welcome at West Village, where rentals and lessons are also offered. In the coming years, POWDR, the corporation that owns Mt. Bachelor, plans to invest in building a larger lodge next to Sunrise—at which point the entire ski school will likely move over to that side of the mountain, according to Jackson. 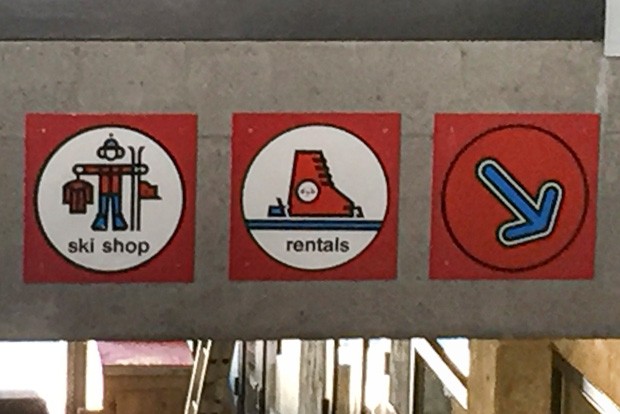 At the end of the tour of the Woodward Progressoin Park and the Sunrise Lodge remodel, Jackson paused to snap photos of some old signs, another thing to add to his to do list. The signs direct guests to the rental area and ski shop with icons of ear-muffed stick figures toting lace-up ski boots.

"We decided we're going to move away from the original '80s era signage," he laughed. "This building was built in 1980, and that's probably when they went up."