Back Together and Back on the Road | Sound Stories & Interviews | Bend | The Source Weekly - Bend, Oregon

Back Together and Back on the Road

Trampled By Turtles plays as part of Subaru Winterfest April 16, and is ready to jam

Dave Simonett, singer/guitarist in the string band Trampled By Turtles, has an EP out called "Orion" that's as close to a true solo project as he's likely to do. While some of the songs have more than just his voice and either guitar or piano, the instruments were all played by Simonett and recorded in his home studio.

That wasn't the original plan for the five highly melodic songs that appear on "Orion." 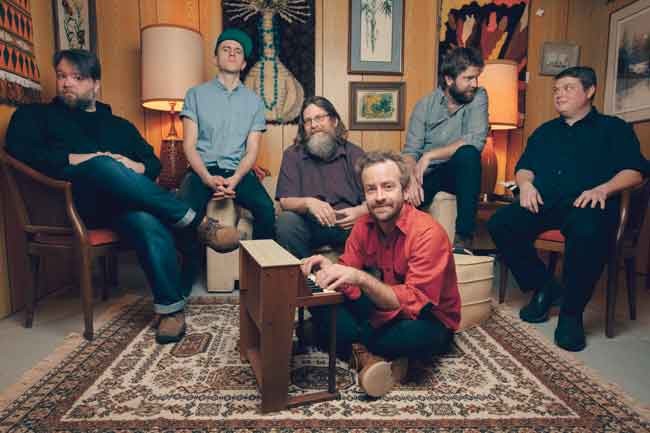 "They were actually written when we were going to try to make a Trampled album (in 2020). We had a studio booked and all ready to go, and that didn't happen," Simonett explained in a recent phone interview, noting that the COVID pandemic scuttled plans for the Trampled By Turtles album. "Then I was just home that whole year and I thought, 'Well, maybe I'll make another solo record or an EP or something just to make something.' And I booked a studio in Minneapolis here and got the band that played on 'Red Tail' (Simonett's 2019 full-length solo album) together and then somebody at that studio came down with COVID. So that got canceled. So I thought, well, hell, I guess I'm just going to record it all by myself."

It figures to be a while before Simonett does another solo album – either with or without additional musicians. With the restrictions of the pandemic easing, Trampled By Turtles has gotten back to playing live and has been adding dates for the summer.

A new Trampled By Turtles album may be in the not-too-distant future as well. Nothing is set in stone, but the group, which includes Simonett, bassist Tim Saxhaug, banjo player Dave Carroll, mandolin player Erik Berry, fiddle player Ryan Young and cellist Eamonn McLain, has taken steps toward that end.

"I've been writing a bit," Simonett said. "I finally figured out how to make some time to write at home, and I feel really good. And we have started to carve out some time in which to do that."

We’ve talked about it a bit where that break ended up being maybe a life saver for our band. It was really good for everybody.” —Dave Simonett tweet this

Simonett now admits it was more like a full-on breakup.

"We said we were taking a break, but in reality, I quit the band," Simonett said. "I just felt like I wanted to burn everything down. We had been just so busy touring and just relentlessly kind of (working), I was just getting really burned out. I mean, musically, I was getting burned out, but I was getting burned out by everything, you know, lifestyle, just the whole thing. I just needed everything that I was doing at the time to kind of stop."

It turned out that getting away from his band of 15-plus years was just what Simonett, who writes the majority of the group's songs, needed. During that time, he was able to branch out musically, as he recorded a folk-rock album, 2017's "Furnace," with his plugged-in side band, Dead Man Winter, and went on to do the more acoustic folk-oriented "Red Tail" and "Orion" – while gaining renewed appreciation for Trampled By Turtles.

"I just realized maybe it took me that space to realize that I really loved this. Thankfully the guys were gracious when I came crawling back," he said. "Everybody else seemed to have missed it, too. We've talked about it a bit where that break ended up being maybe a lifesaver for our band. It was really good for everybody."

The group's first move was to make an album, the 2018 album, "Life is Good on the Open Road." With its mix of fast-paced numbers and heartfelt ballads, it marked a spirited return for Trampled By Turtles.

The renewed chemistry and energy has carried over to the live stage, Simonett said.

Things feel so good the band probably won't even make up a setlist until the day before or day of the first show – which is typical for Trampled By Turtles.

"That's really kind of the last of my concerns, the band's playing," Simonett said. "I know that maybe sounds dumb and it might not prove to be true, but I do feel like that's the one thing I feel really comfortable with. We've been playing, I feel like, long enough now, that we can get on stage and make a show."

Trampled by Turtles plays in Central Oregon on April 16 as part of Subaru Winterfest, which takes place on the mountain all weekend at Mt. Bachelor. Also playing is Them Coulee Boys from 5:30 to 7pm the same night—both at 10 Barrel East.