Baking to Get Baked | The Leaflet | Bend | The Source Weekly - Bend, Oregon

Baking to Get Baked

TREATS + STONERS = A MATCH MADE IN HEAVEN.

A listener is checking in from the Kazahkstani embassy in Washington, D.C., where he's out front smoking a joint, while the hosts of KPOV's High Desert Co-op radio show and I start in on ingesting the ganja cookies I came here to eat. The listeners to this cannabis-focused radio show come from far and wide, but they also come from right here in Bend, where they're treated to real talk about legalization, terpenes... and of course, the beauty of baking with cannabis. 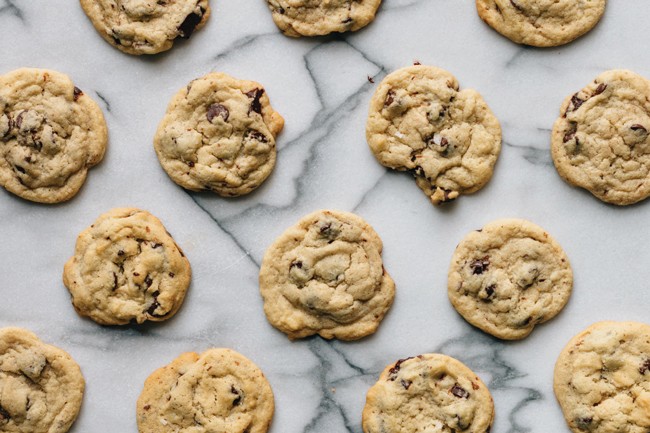 As part of their regular programming, hosts Tris Tristone and Stacie Dread have a segment titled "Stacie Bakes," where they try out various baked goods infused with cannabis. I joined them one recent Monday evening in their remote broadcast "bunker" on Bend's west side for some tips on how to bake with cannabis.

While there is no shortage of gummies, candies, chocolates and other edibles in the cases of local dispensaries, those who grow their own or who simply enjoy making treats for friends may still want to make their own goods from time to time.

"Stacie and I have hung out a lot over the years, and she has become quite the baker during corona," Tristone said.

"It was like, I'm already doing all of this baking, why not get a little segment on the Monday night show and we'll do a little weed baking thing," Dread said. "So we've been doing this Stacie Bakes segment now for maybe, like, a year. Every month we'll pick a week, and we'll pick an edible, and we'll talk about it and hopefully our listeners get something out of it. If not, we are sure entertaining ourselves!"

Among their tips for baking with marijuana: The most foolproof way is to use a tincture, rather than a butter or oil. Plus, it tastes better.

"If you made it yourself with butter or flower, you're going to get that strong, weedy, chlorophylly flavor and there's really no way to avoid that when you make it that way," Tristone said.

With a tincture, bakers can portion out how much tincture they need based on the number of cookies in the batch.

"It's really easy, simple math," Tristone said. "Total cannabinoids divided by portions equals what you're going to get."

Home growers, meanwhile, may need a little more direction than that. So how do you know how much ganja to put in the oil or butter you're making, and then how much to use in the recipe?

"If you're making your own butter, experimenting is one way," Dread advised.

The other way, suggests the cannabis site Leafly, is to aim for proportions of one cup of marijuana to one cup of oil or butter. Put your ganja into the oven for 30-40 minutes at about 245 degrees to decarboxylate it—or in other words, to allow the psychoactive compounds in the plant to activate. Then roughly grind the cannabis and put it in a slow cooker for about three hours.

"Look at the recipe and portion out how much tincture you need based on the number of cookies," Dread said.

And if you're a fan of letting others do the work of creating your edibles, these two radio hosts also shared their favorite Oregon product, available around the state.

The High Desert Co-Op can be heard on KPOV 88.9 FM every Monday from 8 to 10 pm, or check out its archive at https://kpov.org/high-desert-co-op.