Ball 'Til You Fall

The Harlem Globetrotters are stopping in Redmond on Feb. 9 as part of the team's Pushing The Limits World Tour. To see a Globetrotters game is to actually witness magic—pulling off such stunning tricks that you won't see in your everyday pickup game.

I spoke with Briana, AKA Hoops Green, the 15th female Globetrotter over the phone while the team was in East Lansing, Michigan. This is Hoop's fourth season with the Globetrotters. Before this, she played college ball at the University of Texas-El Paso and professionally in the Czech Republic and Spain. As Hoops explains, the Globetrotters basically live in the gym. 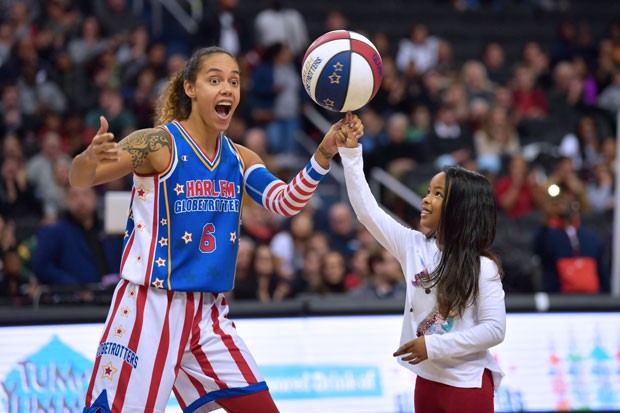 Source Weekly: Tell me about your relationship with basketball. How long have you been playing?

Hoops Green: I've been playing since I was about four or five years old, 'cause my older brother—I always looked up to him. He was playing basketball and I wanted to do what he was doing. I've played at all levels. I played in high school, in college at UTEP, and I played professionally in Mexico and Europe. Then I got the call from the Globetrotters!

SW: Who was better? You or your brother?

HG: Ha! You know he'll say that I'm better, because I'm better at skill level and talent, but he'll also say that he has that big brother strength.

HG: It was a really cool experience. Coming out of college I didn't really know what to expect. It's crazy how with language barriers you can still come together and play basketball. It was really cool to be able to experience that, the different cultures, countries. It was a really good time over there.

“With the Globetrotters, you’re playing basketball annnd you also are entertaining, and people expect you to be perfect.” —Hoops Green tweet this

SW: Do you think there's any difference there in how the game is played?

HG: The girls over there were definitely very physical. I'm not saying that they're not here, but they were really physical. It's like everybody is a shooter—one through five, all positions are spotting up for threes. I'm like, 'girl, you better go post up!' [laughs.] But you know, they get you the ball too, so I had to get used to that.

SW: Going from there, you got the call from the Globetrotters, making you the 15th woman to ever be on the team. What was it like to be invited to play with such a historical team?

HG: It was an amazing experience getting that phone call. It was like it's a once in a lifetime opportunity, so I had to take it. My family was excited. I had a huge support system so everybody was pretty happy about it.

SW: Do you remember your first game with the Globetrotters? Were you nervous?

HG: I do remember the first game. We played where the Spurs play. So, it was a HUGE arena. And I wasn't nervous, but it was a different type of feeling. I went from playing professionally—with that you're just playing basketball. You're just locking in on defense, scoring. But with the Globetrotters, you're playing basketball and you also are entertaining, and people expect you to be perfect. When you're playing a normal game, I mean there's going to be mistakes that happen—it's a game.

SW: What's your take on the Women's National Basketball Association?

HG: I know a lot of the WNBA players. I've played with them and against them, so I definitely have so much respect for them and what they do. I say this a lot, but honestly, women players tend to be more fundamental and overall have a better skillset. Granted, we might not be as athletic as the men, which is more so why people tend to not watch. Because they want to see the dunks and the alley-oops and stuff. I'll always say that as far as skillset and talent-wise, women can compete with the best. If there was a three-point contest, I'm going to pick the girl to win it. Not because I am a girl, but because it's skill level. It's all skill.

SW: Do you have a favorite player?

HG: I grew up a Kobe Bryant fan and Allen Iverson fan. So, both my guys are retired now. That was tough—when Kobe retired, I was like 'What am I gonna do?!' (This interview was conducted prior to Bryant's tragic death.) But I like different players. Ja Morant, he's been freakin' crazy. Harden changed the game—I don't even know what a travel is anymore. Russell Westbrook is so explosive, Lebron's a beast, like you have to respect him. Stephen Curry changed the game with his shooting ability. So, I definitely have players I like to watch, but my guys are retired.

SW: I remember watching Kobe's last game and it was crazy seeing him put up all those points!