Ballots Get Mailed This Week. Don't Wait to Mail Them Back. | Local News | Bend | The Source Weekly - Bend, Oregon

Ballots Get Mailed This Week. Don't Wait to Mail Them Back.

Depending on where you live, your ballot could take up to a week to get to the county clerk

October 12, 2018
comment
The buzz of election season is evident in the office of Deschutes County Clerk Nancy Blankenship, who says the season is both thrilling and high-pressure.

"It's exciting. It's fun because you have a whole lot more interaction with people," she said. "There's a whole lot more going on. Depending on what happens—not knowing what shoe might drop. That adds a little level of stress."

In addition to that excitement, Blankenship says there can be a lot of confusion about voting in the upcoming November election—especially around mail-in ballots.

"Oregon's law is that ballots are due on election day, just like if you're going to polls. The ballot's got to show up on the same day as (the) election," she said. If voters are mailing in their ballots, they need to be mailed well in advance. Ballots postmarked on election day are not enough for a vote to count.

Oregon’s process of requiring people to register no later than 20 days before elections goes back about 30 years.

"There was legislation that went through in the mid-'80s,” Blankenship said. “So, the voter registration deadline, if you are new, is that 21st day — which is Tuesday, Oct. 16. Now, if you're currently registered and you need to update your registration, you can do that any time up until 8pm on election night."

Because of Oregon’s “motor voter” law, which went into effect Jan. 1, 2016, people getting a new driver’s license or ID are automatically registered to vote. Those who aren’t already registered can do so at the Oregon Driver and Motor Vehicles division.

Making sure your vote counts

For voters mailing in ballots, Blankenship recommends having the ballot in the mail by Oct. 30, at the latest. That early date is because mail service is not equal throughout the state, Blankenship says. People in Portland may be able to mail their ballots the day before the election and still have them delivered on time, but on this side of the mountains, mail goes to a collection center outside the area before delivery back in Deschutes County.

“So, to cover all of our bases, we want to give the same information to every voter in Deschutes County,” Blankenship said. 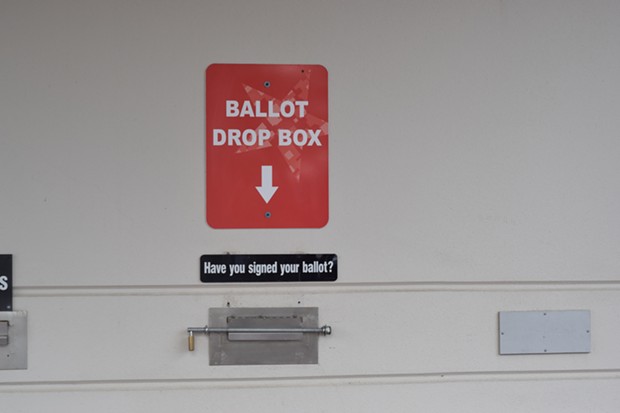 Voters who don’t get a ballot in the mail by Oct. 30 can drop it at a drop site, many open as late as 8pm on election day. Drop site locations are found in the voter's pamphlet and also on the County Clerk's website. Drop boxes open the Friday after the County mails out ballots. This year, some drop boxes will open Oct. 19, with all open by Oct. 31.

"We've got a number of contested races, so hopefully that brings folks out," she said. "As well as some measures on the ballot, depending on where you live."

The life of a ballot is quite complex.

"It goes through a piece of equipment called our mail sorter. The machine takes a picture of the signature side of the envelope, and then it sorts it by groups of precincts," Blankenship said. "We have 50 precincts in Deschutes County. And so, we use those images off the ballot envelope to validate signature verification against the voter's last voter registration card."

After the signature has been verified, it goes through the sorter one more time and to sort any challenged signatures so the team can contact those voters. Blankenship says number of people in each election forget to sign their ballot, so the staff has to contact those voters as well. Every election, they also receive a few ballots from previous elections.