Texas rockers get ready to take on the Volcanic

The South is filled with such a strong musical history that has continued to evolve as music does, and Texas in particular has always played a huge part in the industry. The Unlikely Candidates is a good example of this, as the current five-piece has been forging a different path than that of those earlier examples of Texas music. These guys definitely fit in more with the alternative and indie-rock scene that has boomed since the days of pure country musicians in the area. Today, Texas is just a hotbed for every genre, and The Unlikely Candidates are coming into their own with a debut album that will be on the way sooner rather than later—a mix of rock, pop, and good vibes.

Even with delays of the pandemic and other obstacles, The Unlikely Candidates continue to churn out strong singles that show the band isn't afraid to switch up its sound. Learn more about the rising band in this Band Fact Sheet before it plays the Volcanic Theatre Pub Jan. 11. 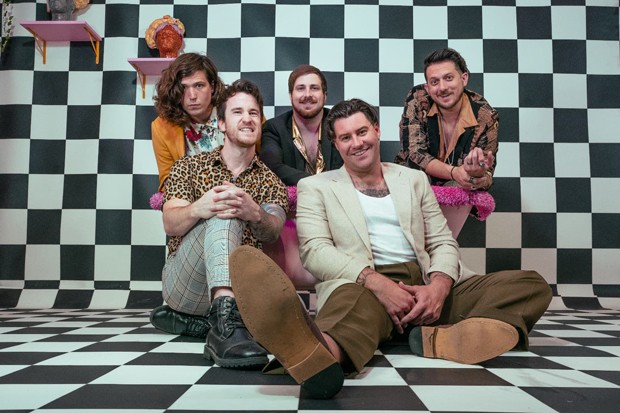 Where they're from: Based out of Fort Worth, Texas, the band originally came together in 2008 as an acoustic duo of Kyle Morris and Cole Male. Then in 2013 the band evolved and the newly formed group released its debut EP, "Follow My Feet," which shared the same name as the group's first single. They haven't looked back since.

What's to like: The energy present in most of The Unlikely Candidates' hits is contagious. The band finds ways to craft these catchy hooks in the middle of epic breakdowns. The amount of versatility it brings to the table should also be celebrated. The band's latest single, "Gemini," feels like a disco-y little number for dancing and fun grooves, while 2018's "Bells" is an anthemic rock song meant to be sung loudly. This versatility is probably a product of where they came from and all the influences in the area. Even when the band takes on poppier tracks, nothing feels out of place, and you get the sense that the whole band is just having a good time when you listen to an Unlikely Candidates song.

For fans of: DREAMERS, The Mowglis, Panic at The Disco

Random Internet Dig Fact: In an interview with the Daily Rind Blog in 2020, the band shared that early on the guys would rent out a room for band practice at a space in Dallas. The owners of the rehearsal space never contacted about payment, and no one was ever there on staff so the band used it eight or nine times in a row without paying. One day they went to get food and when they came back the space was locked with all of the band's gear inside. In order to retrieve the gear, they climbed through a vent and "Mission Impossibled" their way in. The mission was a success and they never practiced there again.