A tribute to two local musicians, who rose up from Bend's open mic scene to record an album and play at Bend Roots

Every music scene has one: the fan who stands at the front, dancing like no one else is watching. In the case of Melodi Johnson, the dancing rose to a fever pitch the second she hit the floor—a shimmering, snake-like twirl that would emerge from her body, whether the tunes were of the mellow folk variety or more "wall of sound." Those attending music shows in Central Oregon with any regularity over the past five years will likely remember her: messy bun up top, fringed, fast-moving dance booties down below and a radiant smile in between.

"Before I ever met Melodi I remember seeing her at almost every show I was at around town," said Jeshua Marshall, a local musician who plays solo and as the bass player for Larry and His Flask. "She was always dancing in the most joyous and infectious way, completely void of fear." 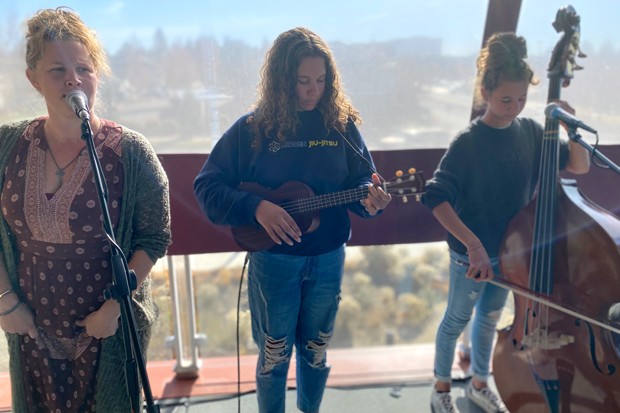 While many will remember Melodi as this unabashed dancing girl, some will also remember her as a local musician who rose up from Bend's open mic scene to finally record her own album, along with her teen twins, Abigail and Shiloh Johnson. Tragically, Melodi and one of the twins, 14-year-old Abigail, were killed March 6 in a head-on collision near Kalispell, Montana, where they had recently moved. Full disclosure: Melodi was my friend, and this is my tribute to her, to Abigail, and their enduring musical legacy.

Bend, with more than its fair share of live music (in normal times), also has a thriving open-mic scene, where budding musicians can fine-tune their sound nearly any night of the week. Around 2017, Johnson moved from singing and drumming in her living room with friends to playing songs at open mics that included the Storytellers Open Mic at The Commons in downtown Bend, and the weekly open mics at the M&J Tavern. In October 2020, Johnson and the twins played their first "official show" at Worthy Brewing, as part of the Bend Roots Revival festival.

"When I met Melodi she was soooo shy—but also determined—but soooo shy," said Bill Powers from the band Honey Don't, and the host of the Storytellers Open Mic. "She had one song for the longest time, and she kept at it each week. She'd come, she'd do better and better—but as much as that she was so funny even in her shyness—how she coped with being on the spot. At some point we had a conversation and I suggested that she see about getting a uke with a pick-up so she could plug in and be heard better, which she did."

"Abi picked up everything so fast," Marshall said. "I was amazed by how talented and passionate about music their whole family is."

During the summer of 2020, Melodi, Abi and Shiloh worked with Central Oregon Recording Studio to record their album, titled "Barefoot Melodies," which they described as "birthed by a desire to reach heaven's ears by song." Deeply spiritual, Melodi's lullaby-like tunes were intended to be "sent out as prayers."

In the song, "Divine," the lyrics include the line, "Here I am with spirit born, perfect with no end." The song "Won't You," starts out with Abi's bass rhythm, followed by mother and daughters in chorus.

Supporting them in the rhythm section was Gabriel Shonerd, a local drum teacher and musician who'd previously spent about a year teaching Melodi the djembe.

"Being in the studio with them and watching Melodi go from breaking the mold at open mic to recording an album was the most amazing thing to watch," Shonerd said. "The way she danced was my biggest first impression of her and how the music just moved her—music was her soul language."

Shonerd was also consistently impressed with Abi, who, still a young teen, seemed so much smaller than the bass she toted around.

"She was so focused," Shonerd said. "The softness and also the wisdom came through when she would be playing her bass—she would go into a state of heighted awareness and focus that was so beautiful to participate with." For Shonerd, who comes from a musical family, participating with the trio on the album—and then seeing two of their lives taken so abruptly—has taught him a lesson about legacy.

"I told my family that is now required for everybody to record an album, so that if anything happens to you, there's a record of your vocals," he said. "I feel so grateful she did leave us with that."

With music being such a big part of their lives, a celebration of life happening April 17 near Bend will include music by Marshall and Powers, as well as Crystal Pizzola of Tone Red and other local musicians. And when open mics finally return to Bend following the end of the pandemic, Powers has a special tribute in mind.

"I've talked with Dan [Baumann, owner of The Commons] recently about starting up with Storytellers again. I hope we can," Powers said. "She has a permanent spot on the list."

WATCH: The Johnsons playing as part of the Storytellers/Source Weekly's Home Concerts series in April 2020