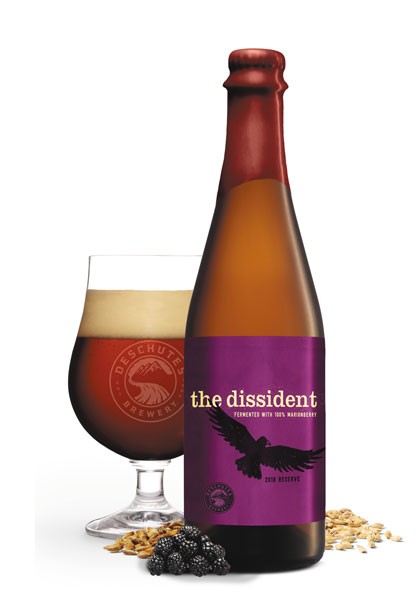 Time to clear some space in the ol' beer shed. Just in time for consistently cold weather, Bendites will get to enjoy not one, not two, but three big-name barrel-aged beer releases in November.

Available right now at Deschutes Brewery's pub on Bond Street is the 2018 version of The Dissident, an "oud bruin" (old brown) ale originating from the Flemish-speaking parts of Belgium. Featuring a long aging process (nearly two years in oak barrels) and a lightly sour taste brought about by wild yeast, the style's great for chilly days. While most oud bruins from Belgium proper are between 4 and 8 percent alcohol, The Dissident tends to hover around the 10-11 percent range.

Adding to the fun, this year features two variations on the traditional Dissident formula, both also available in 500-milliliter bottles locally. One version is aged with marionberries instead of the usual cherries, and the other uses 100 percent Brettanomyces yeast for a bit less alcohol and a whole lot more fruity funkiness. All are great now, but—as proven by the vertical tasting trays Deschutes provided at the pub—store a bottle somewhere for another year or two and the flavors mellow out even further for added complexity.

That's not all from Bend's biggest this month, though. Nov. 10 will see the release of The Abyss 2018, Deschutes' other big yearly launch and a barrel-aged imperial stout that's won gold at both the Great American Beer Fest and the World Beer Awards. Brewed with black strap molasses and licorice, then 50 percent aged in a mix of bourbon, wine, and new oak barrels, it's a stout that no one can afford to miss—and much like The Dissident, a few years of aging totally pays off.

Still not enough barrel-aged beer? Let Crux come to the rescue. The day before the Abyss launch, the brewery will hold an event to debut the 2018 version of Tough Love, its own imperial stout, in 375ml and 750ml bottles. Master brewer Larry Sidor will be on hand for a toast at 6pm, and vintages from 2017 and 2016 will be available on tap as well. Talk about quite literally rolling out the barrel.

The Source is hiring a beer writer!

As much as we hate to see him go, our beer columnist will soon be flying the coop. If you're a beer enthusiast with a way with words, email us your column ideas at bendsource.com.