Disc golf is easy fun for all Central Oregon families

If you head over to Pine Nursery or Rockridge Park this summer, you might spot a group of friends or families cheering every time they manage to toss a small plastic disc into a big metal basket mounted on a pole.

"BLACK ACE!" one might shout, if the player landed a totally
crazy shot in an unintended basket. "Brick," they might sigh instead, if their disc flopped to the ground. 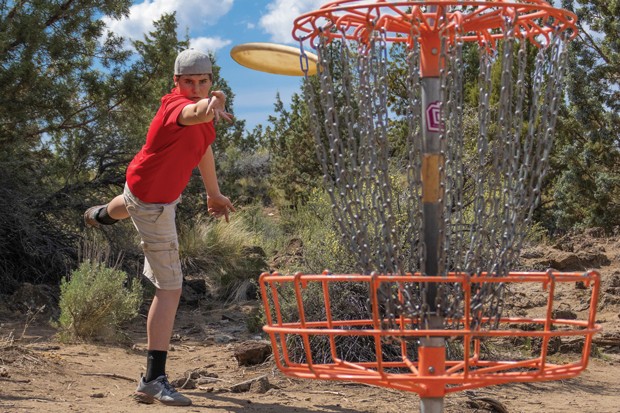 Welcome to the sport of disc golf, a long underground pastime that is becoming increasingly popular among outdoor enthusiasts in Central Oregon.

What is Disc Golf?

As the name suggests, disc golf is played very similarly to golf, on a specially designed outdoor course with nine or 18 holes. Instead of using golf balls and iron clubs, however, it requires special flying discs instead. Just don't call them Frisbees®—which are a trademarked product by Wham-O toys—if you want to be taken seriously.

To start the game, a player must "pull" their disc from a tee area while aiming at a specific target, usually an elevated metal basket. As they progress down the fairway, they make each successive throw from the spot where the previous throw landed, counting each toss as a "stroke." When the "putt" finally lands in the target, the hole is complete, and players progress to the next round.

Just like in golf, the number of strokes is tallied in relation to par, with the overall goal being a low score. The fun lies in the challenge of the terrain, as players navigate around trees, water features, and other obstacles. Whether sinking a long putt or hitting a tree, disc golf shares the excitement and frustration of its namesake!

"The two sports are pretty much the same from a rules standpoint," explains John Bellman, treasurer of the Central Oregon Disc Golf club. "There are some subtleties there about how they determine out of bounds and hazards...but, you're essentially playing with discs instead of golf clubs." 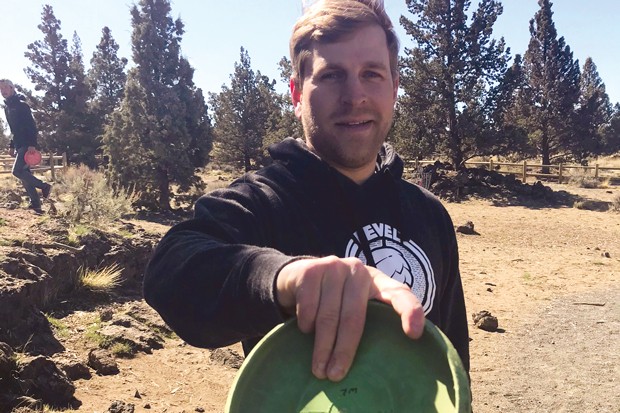 A key difference between the two sports, however, is accessibility. Between purchasing a full set of clubs, renting a golf cart and often obtaining an exclusive country club membership, golf usually requires a steep financial investment. Golf's high skill level makes the sport even more inaccessible for beginners, who usually need to hire a golf pro to get started.

Disc golf, on the other hand, just requires a couple of low-cost plastic discs­—a new set costs less than $20 at most outdoor retailers—and is usually free to play.

"Disc golf is just exploding in popularity right now across the country, there are tons of people playing," Bellman says. "It's a super fun sport with really low barriers to entry. When compared to mountain biking or snowboarding...it's just really easy to go out and play."

Importantly, the game is designed for everyone to play, no matter their age or skill level, as players can simply match the pace of their game to their specific capabilities. Many courses have also been made wheelchair accessible.

Like its forefather, disc golf is played in beautiful outdoor settings, but unlike golf, the course requires far less land and maintenance and doesn't impact the environment in terms of high water and pesticide demands.

Legend has it that back in 1927, a Canadian fellow named Ronald Franklin Gibson got together with a close group of buddies and invented a silly game out of throwing tin lids into four-foot wide circles drawn in the sandy areas of their school yard. However, "Tin Lid Golf" eventually disappeared as the kids grew older and went their separate ways. 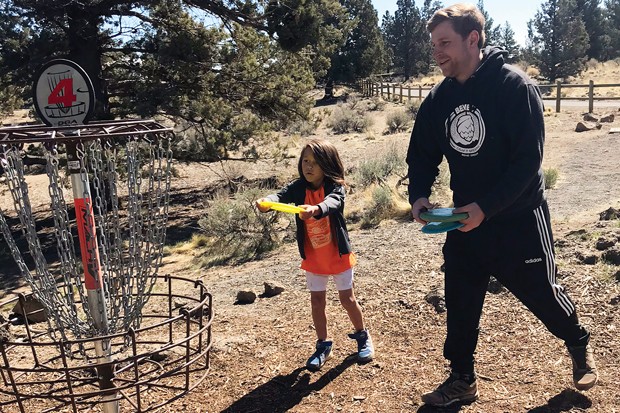 Some 40 years later, a modern version re-emerged among young adults throughout Canada and the United States. There is some debate as to who actually came up with the idea to use plastic discs, but seeing how popular they tend to be on college campuses, it should be no surprise that students at Rice University in Texas held tournaments as early as 1964 using trees as targets.

Nowadays, this popular game spans about 50 different countries, on over 8,000 international courses, and counts over 120,000 active members of the Professional Disc Golf Association. Between winning cash prizes or sponsoring their own discs, high-grossing professional players can earn hundreds of thousands of dollars every year and games are often televised on dedicated YouTube channels.

In Oregon, where it's often joked that we have more trees than people, over 180 community-built and professionally certified courses have popped up in every corner of the state, with more being built every year, according to Travel Oregon.

In Bend, there are two courses sponsored and maintained by the Bend Park and Recreation District: a 9-hole beginner course at Rock Ridge Park and an 18-hole more advanced course at Pine Nursery Park. Both courses enjoy mostly flat landscapes dotted by natural lava outcroppings and native vegetation, but their hole lengths and technical obstacles differ.

"Rockridge Park Disc Golf Course is a great compact course to learn on," says Jeff Amaral, the natural resources manager at Bend Park and Recreation District. "It's considered a 'putt and approach' course with shorter holes, making it ideal for kids."

Several other private courses exist at various resorts throughout the area, such as Seventh Mountain and Black Butte Ranch. If you fancy a high-elevation athletic challenge, you can also take the Pine Marten summer chairlift up Mt. Bachelor to reach the top of an expansive 18-hole course, then wind your way down the mountain playing the game.

"The sport seems to be growing and we are seeing increased use," Amaral explains. "We have a trail counter at the Pine Nursery course that was installed in late 2017." According to this data, the average daily traffic has jumped from 25 visitors a day in 2017 to 111 visitors a day in 2020.

Numerous informal disc golf clubs and formal tournament leagues have risen to meet this demand, including the Central Oregon Disc Golf club, which started about two decades ago and now boasts about 200 members, who host games two to three times a week in Bend, Redmond, Sisters and Terrebonne.

Says Bellman, "Come out on Tuesday nights here at Pine Nursery and we'll get you a free disc, we'll pair you up with somebody who can teach you and give you some pointers out there."

Bellman particularly loves playing with his seven-year-old son, Nyjah Sulesky, who says his favorite part of the game is "when I almost get a hole-in-one, or a birdie, and I really have fun with my dad."