April 30, 2019
comment
Building is booming across Bend, and a couple of big projects are in the works for the Bend Central District—tagged by the City of Bend as a place for urban renewal.

Sunlight Solar, which currently occupies a small warehouse and office building behind Sparrow Bakery on Southeast Scott Street, is in the 120-day review period for its proposed new building on Northeast Hawthorne Avenue, between First and Second Streets. 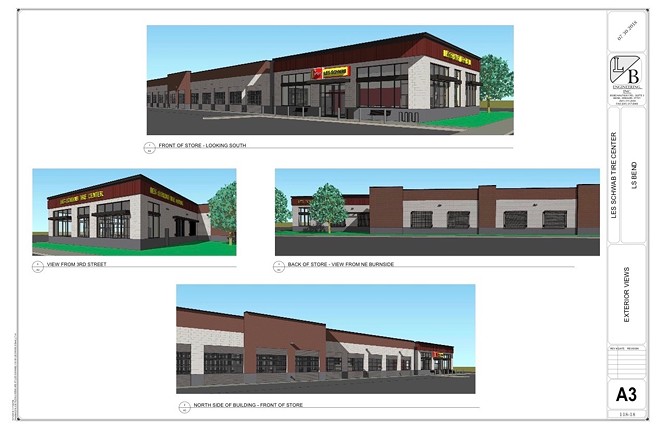 The building, according to information from the City of Bend Planning Division, would contain a 13,154-square foot office and warehouse—and has plans for a second future tenant space. Sunlight Solar submitted its application on Feb. 6 of this year and was deemed complete by the City on the same day. Its 120-day review period ends on June 6, and barring any complications or opposition, should be approved after this date.

Although the area is considered a multi-use zoning district, Sunlight Solar’s new home would also sit in the Bend Central District—which has different planning characteristics and subdivisions. Sunlight Solar would occupy the 1st/2nd Street Subdistrict, which is intended to provide a mix of office, higher density residential, live/work and small-scale retail uses, while still allowing for existing light industrial and manufacturing uses in the area, according to the City.

Because the size of the proposed building is less than 20,000 square feet, it meets the City’s requirements for warehousing, retail sales and service and office space in the BCD. Larger buildings would require a conditional use permit and could end up in a lengthy decision-making process.

According to information from the City’s Planning Department, the new building would be more than 20,000 square feet. The property would house a 4,000 square foot service building as well.

However, the proposed location for Les Schwab’s building also sits in the BCD overlay. According to information from the City, the Bend Central District-South Multimodal Mixed-Use Area doesn’t allow for auto-dependent uses at this time.

For the tire company to get the go ahead to build its new location, it would require a text amendment to the existing BCD-South MMA code.

According to Karen Swenson, the planner assigned to the project, the City is in the completeness-check phase with the submitted plans. After the application is complete, there will be a public hearing date scheduled, then the submitted text amendment will come before the City Council to discuss, probably sometime this summer.