BCD zoning changes were needed. But affordable housing should still be the priority | Editorial | Bend | The Source Weekly - Bend, Oregon

BCD zoning changes were needed. But affordable housing should still be the priority

The Bend Central District, has long been heralded as the area holding the most promise for redevelopment, and for adding more housing and commercial space close to the center of town 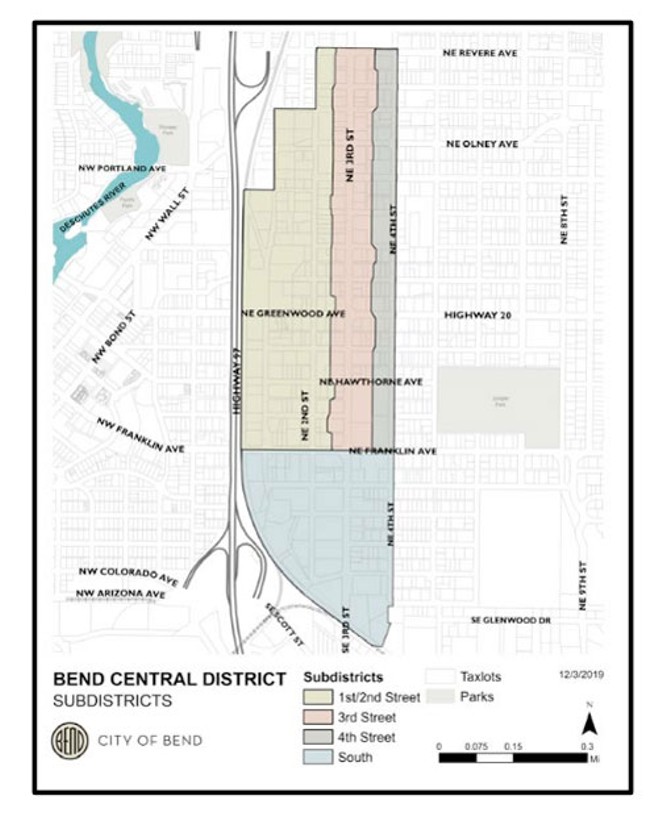 The area just east of Bend's downtown, dubbed the Bend Central District, has long been heralded as the area holding the most promise for redevelopment, and for adding more housing and commercial space close to the center of town. But in the few years since the City of Bend adopted special development standards for that area, not a single new unit of housing has been added. Prospective developers have said the development codes for the BCD have been too restrictive. They've complained about having an absolute requirement to include both residential and commercial spaces in new buildings. They've said the parking requirements were too much, making it so that their planned developments couldn't pencil out. Given the lack of new housing added in that area in recent years, their complaints appear founded.

Last week, the Bend City Council voted in favor of relaxing portions of the development code, including easing, or in some cases, cutting on-site parking requirements all together, as well as allowing developers more flexibility in deciding whether to add commercial space to their buildings. Under the new code, developers have to build the first floors of buildings that face a "main street" (such as Third Street, Greenwood or Franklin, for example) so that they're "commercial-ready"—even if the developer ultimately puts housing in that portion. The code changes also added in a provision that says developers can build their buildings higher than is otherwise allowed—up to 85 feet—if at least 10% of the residential spaces are allotted for affordable housing.

These are good changes, and hopefully, they'll result in more housing being built in a city that badly needs it. They're not without controversy and further monitoring and consideration, however.

At first glance, the move to ease parking, or eliminate any provision for on-site parking, can be "shocking," as described by Bend Planning Commission member Scott Winters during the Feb. 19 City Council meeting. But looking toward the future, in which people are increasingly less dependent on their own vehicles, this is not that shocking at all. (For the record, the BPC is in favor of the changes.)

In "Parking Has Eaten American Cities," a 2018 article on CityLab—a website "dedicated to the people who are creating the cities of the future," author Richard Florida states, "America devotes far too many of its precious resources to parking. This is especially troubling given that driving is in decline. For example, the share of Seattle households with a car has fallen for the first time in at least 40 years, and the percentage of U.S. high school seniors with a driver's license is at "a record low"—down from 85.3 percent in 1996 to 71.5 percent in 2015." The article goes on to detail the work of Eric Scharnhorst of the Research Institute for Housing America, who inventoried the parking of five American cities and calculated the cost of replacing that parking with housing or bike lanes or parks.

"Measured in terms of replacement, it [parking] costs more than $35 billion in Seattle, $20 billion in New York, $17.5 billion in Philadelphia, $6 billion in Des Moines, and $711 million in Jackson [Wyoming]," Florida writes.

In other words, parking, and many Americans' apparent thinking that it's a birthright that should be afforded to them directly in front of every building they visit, is outdated and results in the loss of other spaces we should value more—namely, in Bend's case, housing.

Another study published on the CityLab site points out that easing development codes to spur the construction of more housing, called "upzoning," does come with other concerns. The 2019 article, "Does Upzoning Boost the Housing Supply and Lower Prices? Maybe Not," (also penned by Richard Florida) discusses a study of zoning changes in Chicago, which found that upzoning there led to "higher, not lower, local home prices, while having no discernible impact on local housing supply." The ultimate takeaway there is that while upzoning is intended to encourage development, it doesn't necessarily achieve it—and that the development it does foster doesn't tend to benefit low-income people, or those who need truly "affordable housing."

The recent code changes that make a small provision for affordable housing in the way of allowing developers to build up in exchange for adding 10% affordable units is one example of an effort to combat this, but we need even more of that type of encouragement.

We support the efforts to remove barriers that will help build in the BCD—but those improvements need to make provisions that allow it to be enjoyed by all. What Bend needs most is more affordable units, not more high-end luxury development.