Be Cool, Diners. Things Are Messed Up.

In an ongoing pandemic, with supplies short and workers hard to find, local foodie group issues a call to keep calm and carry on

Maybe it's the beloved cart around the corner that hasn't had your favorite dish in a while. Maybe it's the sign on the window saying hours are cut, and that lunch you planned to have at your favorite pizza joint now has to move elsewhere. Maybe it's the price you just paid—now double—for a big jar of mayo to feed hungry customers at your restaurant. Wherever one turns right now, supply chain issues and worker shortages are wreaking havoc on the food service industry. For local chefs, it's meant bare shelves at the Chef's Store, a supplier for many local establishments. For diners, it's meant disappointment—and for everyone it's required a dose of patience, or at least, that's what some local lovers of the food scene want it to be.

Moderators of the Bend Foodies Facebook group—boasting over 8,400 members as of this writing—posted this advisory on Aug. 4: "The food supplier for Bend's restaurant industry is wiped out and the shipments are smaller/not coming. This will affect a lot of places this weekend. Be kind and have patience, please."

Related Now Hiring, All Positions, All Shifts: Why are businesses having such a tough time filling open positions?

Now Hiring, All Positions, All Shifts
Why are businesses having such a tough time filling open positions?
By Jack Harvel
Local News 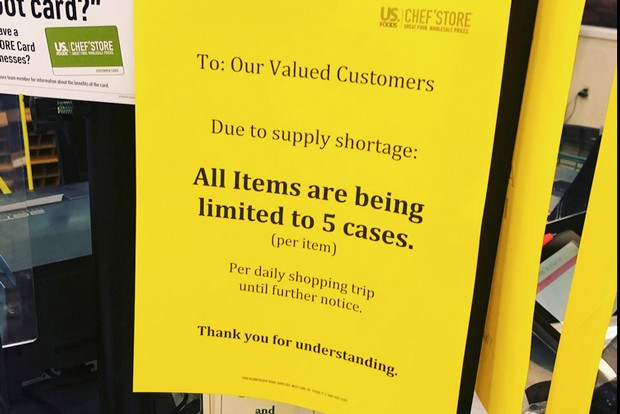 In the face of all that local restaurants are dealing with right now, I sat down with Jon Jones, admin for Bend Foodies, to talk about what he's seeing.

Source Weekly: What are some trends you've observed in Bend over the last two years in terms of what's opening, what's closing and what's popular?

Jon Jones: I think now has been the most challenging time I've ever seen to navigate the local scene. It's hard to know when certain places are open, what days or hours, because a lot of people are really bad about keeping that information updated on their business page on Facebook, etcetera. So it creates these extra challenges and barriers to going out and experiencing the local foods. That's been an issue I think ever since coronavirus started. And then what the different rules are for each restaurant. Do they mask or do they not; are they primarily doing outdoor dining? Are they doing a mix? So it's just been this constant navigation of information, which always seems to be changing and getting updated and in many cases hard to pin down.

There's a lot of times when I found that I just have to call a place to get the most accurate updated information, and I think that's frustrating for a lot of people.

SW: What other things are you seeing?

JJ: The food supply chain has been very challenging for a number of reasons, for one, for lack of workers and that affects things—I think, a lot more than people think. It's not just trying to find staff to come in and work at the restaurant, but it's also not having enough delivery drivers to bring things. Not being able to get certain items so, you know, having to pivot and revamp menus and cut them down significantly. Something I've been noticing a lot lately is restaurants having to pare down their menus.

Related Boba Blockage: A key ingredient in bubble tea is in short supply. We know it's tough—but here's what to try instead

Boba Blockage
A key ingredient in bubble tea is in short supply. We know it's tough—but here's what to try instead
By Ari Levaux
Chow

A lot of patrons aren't experiencing that until they come into the restaurant, which creates this frustration. And the lack of business makes it harder for restaurant owners to pay their bills—buying cheaper food, maybe it's buying frozen food that used to be fresh; maybe it's cutting staff. I think the scene that were living in right now is unlike any other ones before, and I don't think this is going to change anytime soon.

SW: It's gotten to the point where your group put up a post trying to alert people about the situation.

JJ: That was born from seeing how people were talking in the group and trying to find this balance of, yes, this is the reality of the present circumstances of the Bend food scene, and it's frustrating and it's challenging, but we all need to come together during this time and figure that it's hard for both restaurant owners and patrons alike, but we need to kind of find this common ground.

SW: What is your take on the proliferation of things like Yelp reviews? Is that good? Is it bad?

JJ: That's a great question. That was something I actually said specifically in my announcement to the group is that we are not Yelp, and tried to quantify that a little bit more as to why. I think Yelp certainly has a place and for that community, it's fine for what it is. But certainly you have this problem with people who don't have a sense of accountability, who are behind a computer writing these scathing reviews about, you know, restaurants and different eateries, and there's no immediate feedback for them. So they're just writing these scathing reviews and they're very negative and they're not very well balanced, you know? A lot of them are just very one-sided. And I think that's too harsh to do.

I think most review experiences should have some kind of a balance to them and a place like Yelp is known for negative reviews and I think it's too one-sided. Personally, and I think it potentially is too detrimental to the food scene. So that's why with a place like Bend Foodies, for me, my vision is to try and find more of a balance.

SW: What are you excited about as far as the local food scene?

JJ: I'm always happy to see new food trucks, new restaurants—you know, whenever there are challenges in the food scene, that usually creates opportunities. We've seen a number of restaurants unfortunately that have had to close their doors over a couple of years, but that does create opportunity. I'm excited to see some of the shifts of the current food scene and new players coming to the game. I think there's some very promising places that have opened recently, great additions to just the overall experience of the local scene.