Cooling centers in Bend, Redmond and Madras provide a place for unhoused people to escape the blistering heat

On June 25 Deschutes County encouraged locals to take precautions against the extreme wave of heat cooking the Pacific Northwest. Temperatures reached as high as 108 degrees on Sunday and forecasts predict daytime highs over 100 until Wednesday.

The county asked people to avoid the outdoors between 3-7pm, the hottest part of the day, something unhoused people have a much harder time doing. A handful of cooling centers for houseless people started operating over the weekend, made possible by the Central Oregon Homeless Leadership Coalition, Shepherd's House, Jefferson County Faith-Based Network and churches including First Presbyterian of Bend, Mountain View Fellowship of Redmond and the Madras Free Methodist Church. 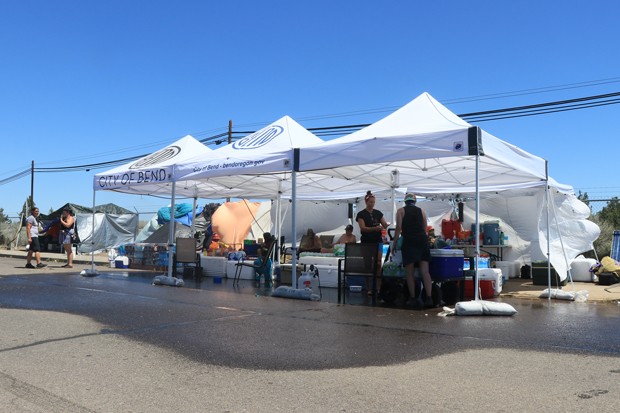 "No one person or service provider can do this work alone," said Lindsey Stailing, Vice-Chair of Homeless Leadership Coalition in a press release. "The HLC thanks partners from across the region for collaborating to provide these lifesaving resources to our unhoused neighbors."

In Bend the cooling centers are at First Presbyterian on Ninth Street, which will be open on the weekends, and Shepherd's House on Second Street will cover the weekdays noon-5 pm until July 4. Volunteers will also go to the area around Hunnell Road, where many camp or park RVs, to directly aid the 90 or so people there.

Related Boot: People are dying in the heat, while others are collecting likes on social media for trolling them.: The record heat we are experiencing all around the region became deadly this past weekend for two people living on the literal margins of Bend

Boot: People are dying in the heat, while others are collecting likes on social media for trolling them.
The record heat we are experiencing all around the region became deadly this past weekend for two people living on the literal margins of Bend
Editorial

"One of the things with cooling centers that I think is really hard is people don't want to leave their home, there's a sense of security, there's fear of whether their stuff will be stolen or taken away by a property owner," said Colleen Thomas, Homeless Leadership Coalition chair. "Having an opportunity of meeting people where they're at, like this cooling station here (on Hunnel) is really important."

“There’s fear of whether their stuff will be stolen or taken away by a property owner.” — Colleen Thomas tweet this

Two cooling centers are also active in Redmond, one on the corner of NE 17th Street and Greenwood that will operate until Wednesday from 2-6 pm and another at Mountain View Fellowship on SW 35th Street that will be open from 12-5 pm until Friday. The cooling center in Madras is operating out of the Madras Free Methodist Church on S. Adams Street from noon-5 pm through the Fourth of July.

The centers potentially could save lives during the heat wave, which is allegedly a factor in the death of two people who died on Hunnel Road, though that hadn't been confirmed by the Deschutes County Medical Examiner's Office by press time.

"For those with no place to shelter during the day, the option of a cooling center will hopefully bring a sense of relief and safety," Thomas said. "We have been monitoring the weather and working closely with community partners and agencies to come up with a plan to provide safe and cool places for individuals with the impending excessive heat. The opportunity to open these cooling centers is a step in the right direction and we will continue to advocate for year-round and long-term options for our vulnerable neighbors."