Because Tasting is Believing

Having the opportunity to taste Trevor Mayfield's unique spirits is just part of the reason to stop into a new distillery in La Pine. Mayfield and his partner McKenzie Nokes have created a modern, rustic hangout spot in the middle of town.

Mayfield released his first Badlands liquor in 2019, distributing Cucumber Gin and Wine Cask Vodka to liquor stores from La Pine to Bend. Then 2020, and opportunities to let the public taste his creations disappeared. The two had already turned an old logging facility in eastern La Pine into a gorgeous, shiny distillery, but now it was clear that opening a tasting room was necessary. Brainstorming the idea, Nokes realized that, "This is a small town and it needed a few things—like somewhere to sit and grab a cup of coffee in a mug and a menu that's ever-changing." 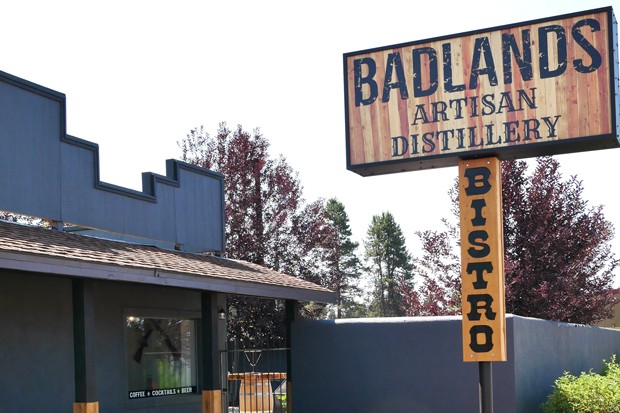 On Feb. 1 the native-Oregonian couple started a complete remodel of a former Mexican restaurant directly on Highway 97. When the tasting room and bistro opened up five months later, it was a complete transformation filled with warm, industrial features. Coffee, beer, wine, a simple, locally-sourced menu are offered along with bottles of Badlands Plum Vodka, Cucumber Gin, Wine Cask Vodka, Double Barrel Rye and of course, tastings.

Related The Bend Ale Trail Relaunches, with More than Just Breweries: After more than a decade, Visit Bend incentivizes getting your drink on

The Bend Ale Trail Relaunches, with More than Just Breweries
After more than a decade, Visit Bend incentivizes getting your drink on
By Brian Yaeger
Beer & Drink

Outside is a beautiful patio decorated with hand-made barrel lighting, copper stills, Redwood round high-top tables, games and a stage. Extending from the patio is another large seating area—all of which is available to rent as event space.

The owners describe the distillery itself as "non-typical," taking its inspiration from a deer named Big Boy who was local legend because of his non-typical rack. Big Boy chose Mayfield's family property as his living and final resting space, so now his hydro-dipped skull is the centerpiece of the tasting room; his golden likeness the logo. The B.A.D. attitude goes into creating spirits different than others. It means hand-peeling 500 pounds of local cucumbers for its popular Cucumber Gin and aging vodka in red wine casks for one year, resulting in rose-tinted Wine Cask Vodka that Nokes says, "disappears when you taste it." Mayfield does not use any sugar, artificial color or flavor in his spirits. The slight sweetness and copper color of Plum Vodka is simply from a quarter-ton of plums. 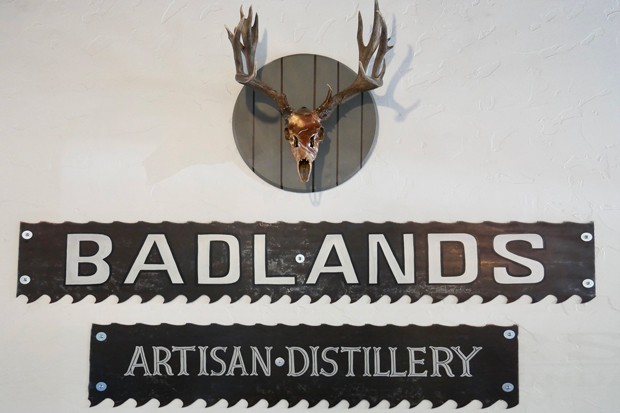 As carefully concocted as the spirits are the cocktails. Unusual combinations such as "Call Me a Cab" utilizes Plum Vodka, lemonade and red wine in an elevated Sangria-esque beverage while others are touched with the essence of local herbs, perfect for pairing with a cheese plate.

All of the above are reasons to look for the Badlands Tasting Room sign while you're heading down Highway 97. As Mayfield says, "Stop in for a coffee, buy a bottle for the end of the day."