There's a way to get a guy to stick around after sex, and it's to wait to have it till he's got feelings for you

I'm a woman in my 20s seeking a boyfriend. On the first date, I like to have a few drinks and, if the guy and I hit it off, have sex to see whether we have physical chemistry. Lately, I've had a string of great first dates — flowing conversation, emotional rapport, and what seemed to be long-term potential — yet they all ghosted me after sex. Are men still living in the Victorian Age? 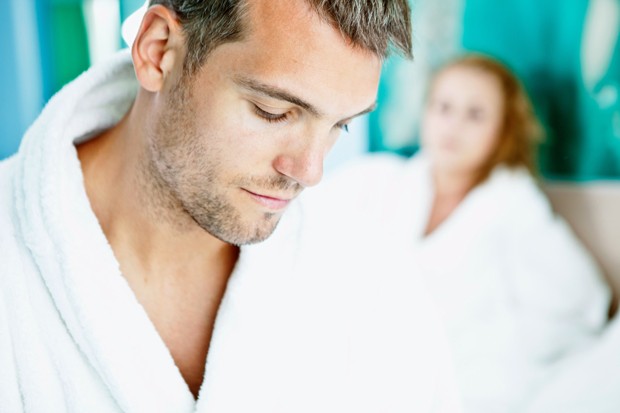 The wait to have sex with you mirrors the mandatory waiting period to buy a plastic squirt gun.

That said, you aren't wrong to want to figure out up front whether there's sexual chemistry. As for just how "up front" to do that, there's reason to slow your roll—even if it means you get involved with a few guys who turn out to be sexual duds.

Because a woman can get pregnant from a single ill-advised naked romp, women evolved to be the "choosier" sex—to take a "hmm, we'll see..." approach: stand back and assess a man's potential to "provide" and willingness to commit before dropping their panties (and everything else) on his bedroom floor.

Men co-evolved to expect female choosiness and to need to prove themselves over time to women of high mate value: women who can hold out for just the right guy. In short, men tend to value (and stick around for) what's hard to, uh, grope.

Women are also more likely to succumb to a sort of alcohol-induced blindness, which psychiatrist Andy Thomson, in an email to evolutionary psychologist David Buss, called the "Prosecco perception bias," after the Italian sparkling wine. Buss, who included this in his book, "When Men Behave Badly," explains that women have less of the alcohol-detoxifying enzyme, alcohol dehydrogenase. (That's why women get more rapidly drunk than men, even when they throw back less alcohol per pound of body weight.) "Because alcohol stimulates bonding endorphins, women are more likely to misread interactions with men" when tipsy, Buss explains, and "overestimate the likelihood of an emotional bond and a long-term relationship."

Sure, there are blissful long-term relationships that started out with no-strings-attached sex. However, because you're a woman hoping to find a boyfriend, having sex on the first date is a risky strategy. There's a way to get a guy to stick around after sex, and it's to wait to have it till he's got feelings for you—though, admittedly, zip-tying him to your headboard works, too.

I'm a straight guy using dating apps. What's with the constant flaking guy friends and I experience from women we're meeting for first dates? One woman on Hinge texted me to confirm 30 minutes before we were meeting at a bar but never showed and stopped responding to my texts. The next day, she complained that her phone had died. Another girl on Bumble agreed to have drinks, but when I texted her the day of, she unmatched. This extreme rudeness only happens with women I meet on dating apps, not those I meet in person, like at a friend's party. Any idea why?

There are valid reasons to be a no-show for a date with no explanation, for example, the experience so many of us have of being abducted by aliens who don't have a charger that fits our phone.

This rudeness you're experiencing—all these women treating you like a disposable object instead of a person with feelings—isn't caused by app use, per se. The problem, as I explain in "Good Manners for Nice People Who Sometimes Say F*ck," is that we are now "living in societies too big for our brains": vast, transient "strangerhoods."

We didn't evolve to be around strangers and aren't psychologically equipped to live in a world filled with them because the psychology still powering our thinking (and behavior) today is adapted for small ancestral hunter-gatherer societies. Ancestral humans might've been stuck with pretty much the same 25 people for much of their lives (per estimates by anthropologists Robert L. Kelly and Irven DeVore) and might've have had a larger surrounding society of perhaps 100 to 150 people.

In the tiny ancestral world, the need to preserve one's reputation was a psychological police force that kept even rotten people from acting their rotten worst. (This is still a factor today in small towns where everybody knows everybody.) In contrast, strangers "meeting" in the virtual world—on apps that are basically eBay for dates—have no shared social context, so...bye-bye fear of reputational ruin!

In other words, when connecting via an app, it's probably a good idea to expect unreliability. You might even bring a book to read in case a woman ends up running a little late—uh, intends to leave you sitting there at the bar until you decompose.