It's a match made in heaven for lovers of sweets and beer.

On March 2, Bend Brewing Company held a Girl Scout Cookie and Beer pairing, donating a portion of the proceeds to the Girl Scouts of America and pairing six cookies with six beers. 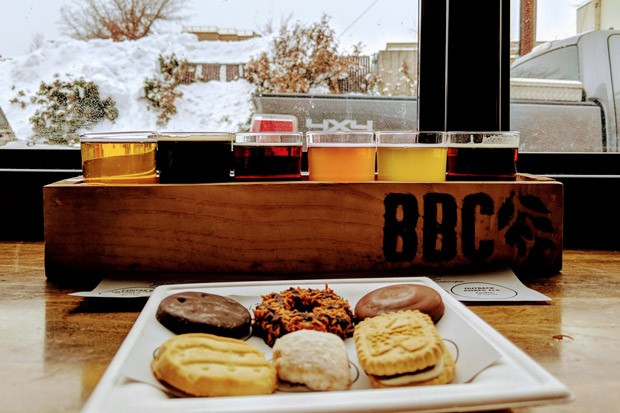 The first pairing: The classic Thin Mint cookie with a Coffee n' Cream Blonde Ale. The mint calmed the coffee, and likewise, the coffee mellowed the mint, offering a lovely, velvety balance. The beer isn't hoppy, and I highly recommend this beer for the first-time coffee beer drinker. It's a 5 on the drinkability scale.

The second pairing was the Caramel deLite—also known as the Samoa— paired with Trade Wars Export Stout, a foreign style stout, roasty and malty. The Samoa is my FAVORITE cookie. The sweet cookie cuts through the dark, rich roastiness of the beer. This beer is not for the faint of heart, so it's a 3 on the scale.

Next up: Peanut Butter Patties—also known as Tagalongs—paired with Stump Thumpin' Brown ale with coffee. The peanut butter and chocolate overpowered the coffee in the beer, as the coffee is very subtle. The pairing was muddied a bit. A stout or porter would have paired better. On the other hand, this coffee beer with the Samoa was fantastic. The brown ale was rich and a touch bitter, so I give it a 4 on the scale.

For the fourth pairing, Bend Brewing Company's famous Ching Ching sour ale was paired with the Shortbread—also known as the Trefoil, a delicious and buttery cookie. The beer is tangy and sweet and able to cut through the butter cookie. This was an awesome pairing. Go buy a box of Trefoils and a bottle of Ching Ching; you won't be sorry. Ching Ching is a solid 3 on my drinkability scale, as it's a true sour. If you already love sours, it's a great beer, and has a low ABV at 4.5 percent.

The fifth pairing was the Stubborn as a Mule beer with the Savannah Smiles cookie—both zesty and lemony. This beer is an experimental one inspired by the Moscow Mule cocktail. By itself, it's too sweet, and the lime was a bit much, but with the cookie it was good. The cookie balanced the lime and allowed the mint and ginger to come through a bit. I give the beer a 3 on the drinkability scale. It's a niche beer.

The final pairing was the Girl Scout S'mores cookie alongside the Outback Amber Ale. I liked this combo. The cookie is a special edition this year, with two different types—one chocolate covered, one with chocolate on the inside. The beer is a malty amber ale and gets a 5 on the scale.

Girl Scout Cookie time is always a special time of year, and this beer event added to the fun. I'll be looking for it again in the future.