Beer and Hardware by the Beach

t's not news, perhaps, that the coast of Oregon is worth visiting for the beer as much as the pretty views. From 7 Devils in Coos Bay to Buoy and all their friends up in Astoria, nobody's ever very far from some locally-made refreshment. What can be a problem, however, is finding all the other necessities of life.

The solution, as found by Cannon Beach Hardware and Brewpub, is easy: Just combine them into one. 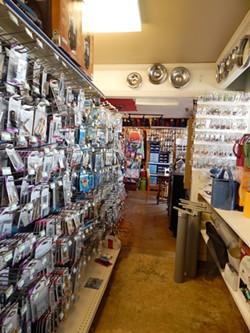 A town of around 1,700 permanent residents (far more in the summer), Cannon Beach is 25 miles south of Astoria and best known for the enormous beach that expands out along the west side. From it, in plain sight, is the 235-foot-tall Haystack Rock, which juts straight out of the ocean water and is usually accessible on foot during low tide in the summer. The Twilight gang took a surfing trip there during the 2008 movie, and as any '80s child knows, Mikey used the rock to help triangulate the location of One-Eyed Willy's treasure in "The Goonies."

The residents of Cannon Beach can't live off Hollywood street cred alone, however, and so Cannon Beach Hardware was founded in 2010. The problem it solved, as described by owner Ryan Dewey, was a simple one: Residents had to drive miles to Seaside or Warrenton for simple things such as stainless-steel fasteners and paint rollers, but the town wasn't large enough to support a full True Value-type place of its own.

he answer to this—inspired by a similar place Dewey heard about off the southwestern coast of Ireland—was to combine it with a pub. So the modern "Screw and Brew" was invented, featuring two floors of home-improvement stuff, six taps of beers from Fort George and the like, and an old Coke vending machine full of other bottles.

It's a fun spot to hang for a while, enjoying a meatball sub before picking up a staple gun to go, but that's no longer all that Cannon Beach offers. On the far north side of town is Public Coast Brewing, named after the landmark 1967 bill that officially established the entire Oregon coast as accessible to the public. Its beers, which sometimes make it out to Portland, include The People's Pale, made entirely with in-state ingredients. And when in town, it's impossible to miss the soaring roof of the local Pelican Pub, the brewery's third location after Pacific City and Tillamook. No day suffers when a Kiwanda cream ale and the wide-open beach are paired together.