The skies may have largely cleared of smoke in Central Oregon—but elsewhere in the state, the damage and the effects of the recent (and ongoing) wildfires around the state will be felt for quite some time. To help out, many of Central Oregon's beer people are looking for ways to help. For Deschutes Brewery and a host of partners around the state, that's taking a number of forms—including the formation of a collaboration 12-pack. 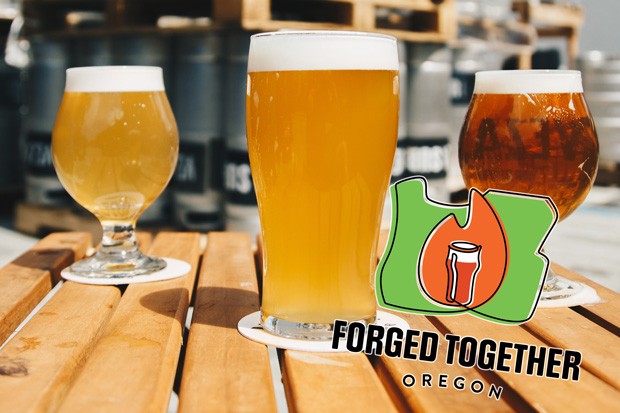 Deschutes Brewery is working together with a host of other breweries around Oregon to release a "Forged Together Oregon" variety pack, with 100% of the proceeds going to support wildfire relief efforts.

"Oregon is strong and resilient, and we are forging together as an industry for our community in this collaboration for our beautiful state," stated Michael LaLonde, CEO of Deschutes Brewery, in a press release.

"All of the participating breweries are donating amazing beers," Erin Rankin, marketing communications specialist for Deschutes Brewery, told the Source. "There will be a good mix of IPAs, a session ale and a winter ale."

The "Forged Together Oregon" variety pack will be available at Deschutes' Bend and Portland pubs, as well as the tasting room on Simpson Avenue in Bend. In addition, the brewery hopes to make the pack available on its website and available for pickup, too. The beers should be available by the end of October, Rankin said.

Deschutes Brewery's team stepped up in a number of ways to help in the wake of the deadly wildfires that raged through Oregon in recent weeks. The brewery donated 5,700 cases of canned water to firefighters working the Holiday Farm Fire in the McKenzie River area, as well as to the Red Cross in Salem, to Family Kitchen in Bend and to people on the Warm Springs Indian Reservation. The downtown Bend brew pub has also cooked meals for 150 displaced people, by way of the Salvation Army Bend Corps. And with people still battling some of the biggest blazes in the state—many which have yet to be fully contained—Deschutes Brewery is inviting firefighters in to its Portland and Bend pubs "for some much needed R&R and to show appreciation for protecting the Pacific Northwest community."