Party it up in Bend, Portland...and Boring? 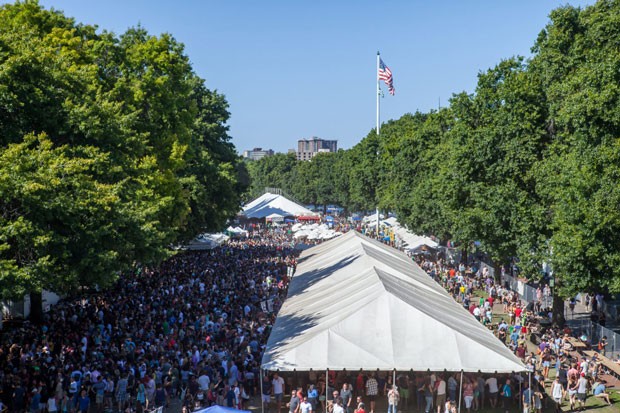 It's late July, and that means one thing—time to go out, swelter under the hot sun and trade wood tokens for craft-beer pours, over and over again.

This upcoming weekend features a couple huge events for Oregon brew folks, not least of which is the largest fest in the entire state. The Oregon Brewers Festival, running Thursday through Sunday at Portland's Waterfront Park, is expected to attract over 70,000 visitors across the four-day event, which is part of the reason it provides an estimated $23 million in economic impact on the city.

As always, the idea behind OBF is pretty simple: Go to the riverfront, buy some tokens and sample the best of the best in the PNW. This year's event features 80 beers from 80 breweries, over half of which are exclusive to, or making their debut, at this event. (For the first time, there will also be a few ciders and wines on tap, inclusivity never being a bad thing.) Highlights to look out for include Juice Jr. from the haze kings at Great Notion, along with a wide variety of goses and fruit-flavored sour ales to help stave off the high-90s temps forecast for Portland this weekend. (Central Oregon's very own Riverbend is launching a NEIPA there called "We Found Barb In The Strawberry Field," which already sounds at least worth tossing a token at.)

Had it with the mass-market fests? Then march about 10 minutes west of the riverfront this Saturday and hit up Bailey's Taproom, the Pearl District perennial that's defined good beer in a great beer city for over a decade. Their 11th Anniversary Party is set to take place all day, from noon to 11 pm, and it'll be semi-outdoors, connecting Bailey's to The Upper Lip upstairs to offer a combined 28 taps of assorted barrel-aged nonsense. The big draw is the Bailey's anniversary beer, a co-op with Reuben's Brews in Seattle that takes a bourbon barrel-aged Belgian strong dark beer and blends it with a red wine barrel-aged imperial stout. (They'll have some not-so-heavy beers on tap, too! Promise!)

These two mega-events serve as a gateway to August, which is just as well-laden with summer beer events. There's Bend Brewfest, of course, kicking off at the Les Schwab Aug. 16 (more on that later). The following week sees Brews for New Avenues in Portland, one of the world's best fests for those looking for uncommon taps and silent auctions for delights from across the world. And let's not forget about Boring, Ore., a bit west of Portland proper. The inaugural Boring Beer Fest, from Aug. 24th to 26th, places a special focus on the smaller breweries in the hinterlands of greater Portland, including Ordnance in Wilsonville and Bunsenbrewer in Sandy. Plus: Visitors can finally boast that they've visited "the most exciting place to live"!