Being a City Councilor is a Full-Time Job | Editorial | Bend | The Source Weekly - Bend, Oregon

Being a City Councilor is a Full-Time Job

Pay them for it.

This season, Bend city councilors have been busy tackling a number of important community issues. They just passed the Community Climate Action Plan—a series of actions aimed at reducing fossil fuel use in the city—after much debate about mandating the inclusion of a Home Energy Score program. The Council ultimately decided to omit the Home Energy Score portion, likely influenced by the receipt of over 400 letters opposed to its inclusion. 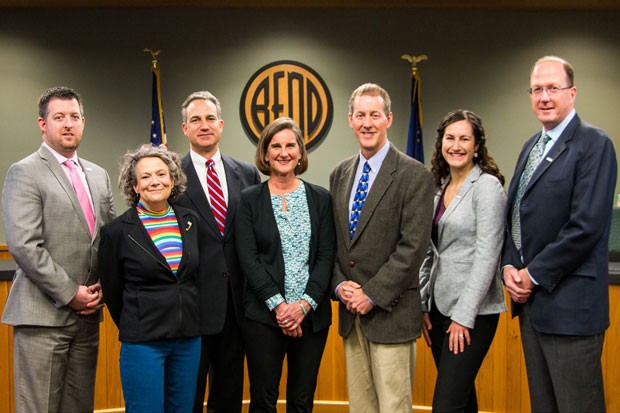 Meanwhile, councilors are also considering what type of transportation-related bond measure to bring to voters in May. Depending on what councilors decide, voters may see a transportation bond totaling either $190 million or $275 million come before them this spring. While the projects involved in those prospective bonds are most certainly needed in a growing city that struggles to keep pace with its population explosion, it's instructive to point out something out: Those massive projects, while not developed by city councilors, will be moved to the ballot box by those councilors—councilors who, by the way, make a grand total of $533 per month for that important work. It might as well be volunteer work, for the massive time commitment that being a Bend city councilor entails.

Let's take the issue of the Home Energy Score as a case in point about the David-versus-Goliath situation they're in. Councilors told the Source they've been bombarded by calls, emails and other correspondence from people opposed to that mandate. In a city such as Bend, where local polling doesn't exist in the same way it might in Salem or Washington, D.C., it's difficult to gauge whether that represented the voice of the majority, or simply a coordinated campaign from people supporting local business interests. For a volunteer councilor already bombarded by the demands of the elected position, it's challenging to wade through sophisticated lobbying such as that and take things at face value.

Bend politics, as evidenced by how much was donated to local mayoral campaigns (and who donated), in the last election—are more sophisticated than ever, and it's not surprising that low-paid councilors might get overwhelmed by any party or PAC that opts to coordinate their efforts in this way. To be fair, it doesn't appear that there was anything insidious or illegal in the recent flood of correspondence, but it doesn't mean that the onslaught accurately represented the wishes of Bend's general population. The squeaky wheel just got the grease.

A councilor who works full time, not part-time, as current councilors do, may have more time and resources to sort through each issue and to determine what's behind a coordinated letter-writing campaign. Not to mention, a part-time councilor who has other professional responsibilities—such as being a realtor, for example—may vote on the side of an issue that benefits them professionally. But a full-time councilor who doesn't juggle another job in order to pay the bills should not have to wrestle with this type of professional conflict of interest at all.

And that brings up yet another issue: equity. How can Bendites reasonably expect to be governed by a City Council that accurately represents them, when a person with a low- or moderate-income, forced to decide between serving on the Council and volunteering one's time or paying the bills, must choose the latter? Until Bend pays its councilors a living wage, only those who are affluent, self-employed or otherwise less concerned about how to pay the bills will be able to serve.

Bend voters have already voted in favor of changing the city charter, removing the topic of councilor pay from the charter last year. That means that councilor pay is not as set in stone as it was only recently. The Deschutes County Board of Commissioners gets paid full-time salaries for their work. Bend city councilors should, too.

As Bend morphs from a small town to a bona fide city, lobbyists and government affairs professionals are already representing some of our largest private institutions. Bend's elected officials should have at least the same amount of sophistication and coordination at their fingertips—and adequate pay for councilors would be a good start.

We already expect our councilors to be professional, well-prepared and committed. The compensation they receive should reflect that. Bend should revisit this issue before the topic of council pay is adjusted again in 2021.