Craft beer and cocktails to wash down forthcoming noodles and burgers

From the second established brewery in Bend to establishing the newest craft cocktail and beer watering hole, Bend Brewing Co. is now slaking thirsts at The Grove, the new market hall in Northwest Crossing. What distinguishes the new Waypoint from Old Bend's BBC is, as brewmaster Zach Beckwith explains, "the distinct branding and the co-equal focus on high-end cocktails and wine. Our pub is kind of the lived-in, relaxed spot, and Waypoint allows us to elevate the experience a little bit." And while NWX is a bit tonier, Beckwith notes, "It's still Bend so it's a casual vibe but with a little more attention to detail."

The new joint features eight draft taps (with four more available via an outside beer cart) including Grove Pale Ale, brewed exclusively for Waypoint. By virtue of being a pale ale and not an India pale ale, it is medium bodied with a slightly more sessionable ABV of 5.8% (most IPAs are over 6% nowadays). It has its sudsy feet planted in craft beer's past, with grapefruit-forward Cascade hops as well as the present with more strawberry-leaning Strata hops. "It's something that's familiar, but new at the same time," adds Beckwith. 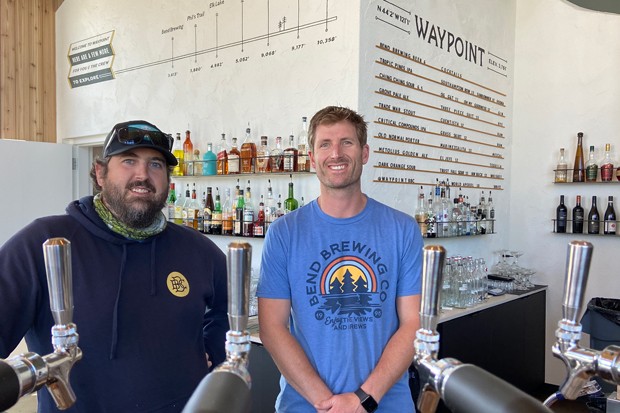 While BBC operates two brewing facilities, both a seven-barrel system visible upstairs at the downtown pub and a 15-barrel production system that is not open to the public, don't expect the new bar to turn into a testing ground for new beers. Grove Pale Ale is likely to be the only offering those seeking to boost their Untappd accounts can't find at the brewpub.

For those less into hop cocktails and more into true cocktails, the bar program is way on point. BBC's longtime bartender John Paul can be found squeezing grapefruits nonstop before doors open. And BBC co-owner Packy Deenihan's uncle, Tim Deenihan, who's a mixologist at the W Hotel in Seattle, designed most of the house cocktails. There's even a house vodka (produced in Astoria) that may one day become commercially available. House cocktails are enumerated next to the beer, each listing the featured spirit from vodka to rye whiskey to Mezcal. Oh, they'll make your global classics like Manhattans and Moscow Mules, but for a Bend twist, try the Southampton Row made with black tea-infused vodka, fresh lime, and egg white, giving it a frothy head reminiscent of Bachelor's fresh pow on opening day. If you're driving or otherwise abstaining, there are house mocktails, too.

The rad part is that, given that The Grove is essentially what Beckwith calls "a food cart pod for all four seasons," people can take a beer, wine or cocktail and enjoy it anywhere on the premises—indoors or out. The bar has an inside capacity of about 50 while the outside patio—replete with both sun and shade and a firepit—triples that. But don't let Waypoint's space, or tasty meat'n'cheese board, limit you. Visitors can enjoy a Left Coast burger with some Tropic Pines IPA or an OG G&T with some pasta with vodka sauce from Sunny's Carrello. For dessert, or should the heat dome return, try a pint of Trade War Stout with Elly's Ice Cream, plunking a scoop of Triple Chocolate Bomb or Toasted Coconut to make a float.

"This was a way for us to embrace a more modern element and show what the future is," says Beckwith. Maybe that explains why Waypoint's logo, which sort of looks like that of the Wu-Tang Clan (Ching Ching Rules Everything Around Me?), is a W with an arrow pointing the way toward that future.