Bend begins switching its street lights to LEDs this week—part of a broader effort to reduce the city's fossil fuel use and grow more resilient in a warming climate.

The move changes the light fixtures of about 2,300 street lights on public roads to light-emitting diode fixtures. The new LED lights use up to 50% less energy and last longer than the existing high-pressure sodium bulbs, according to the City of Bend. City officials expect the switch to save nearly 1 million kilowatt hours and to reduce greenhouse gas emissions by 619 tons each year. 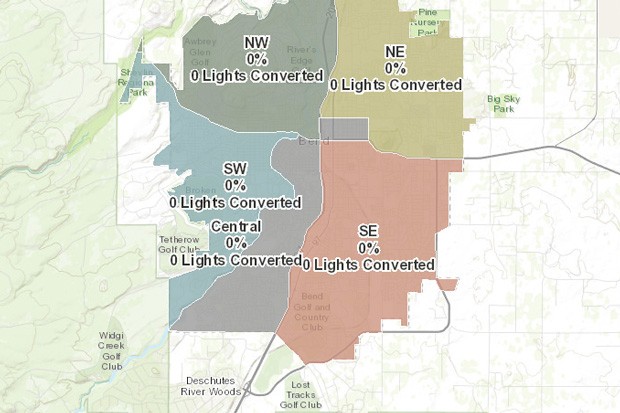 "We're excited about that one," Cassie Lacy, Bend's sustainability coordinator, said of the LED project. She noted additional benefits of safety, with a brighter white light from the LEDs; and of less light pollution, with a design that better focuses light down and shields it from spreading upward into the night sky.

Work will take place from 7am to 7pm on weekdays and could include weekends. Crews will finish about 30 to 40 fixtures each day, taking about half an hour to switch each light. The project may require temporarily closing road lanes, sidewalks, bike lanes or parking next to the lights that crews are working on, but will not typically require shutting off power. Work could finish by the end of the year. The project will not add any new street lights and doesn't include about 250 city street lights that already use LEDs. The project also excludes more than 500 street lights in Bend that stand along state highways or private roads. Existing LED streetlights can be seen on 14th Street between Simpson and Galveston avenues.

The street light project falls in a subset of projects the city decided to move forward with earlier this year—a $3.8 million effort that includes installing solar panels, updating heating and cooling systems, improving energy efficiency and saving water at city facilities. tweet this

The project is part of a broader Bend effort toward sustainability. In 2016, the City Council passed a resolution setting climate action goals to reduce fossil fuel use in city facilities and operations by 40% by 2030 and 70% by 2050; to reduce community-wide fossil fuel use by those same amounts and dates; and to make city facilities and operations "carbon neutral" by 2030.

To meet those goals, Bend is crafting both a strategic energy management plan to guide city operations and facilities, and a community climate action plan to guide efforts in the residential and commercial sectors. Both plans are expected by the fall. The city's internal strategic energy management plan will address city efforts such as buying renewable energy, changing the city vehicle fleet, reducing energy use in water filtration and waste water treatment plants and setting standards or policies for procuring equipment. The street light project falls in a subset of projects the city decided to move forward with earlier this year—a $3.8 million effort that includes installing solar panels, updating heating and cooling systems, improving energy efficiency and saving water at city facilities. City officials expect annual savings from lower energy costs to fully cover the costs of those projects.

For the community side of things, a plan is taking solid shape and could go before the City Council for approval in the fall.

Earlier this year, a city survey on Bend's climate efforts prompted responses from more than 1,500 people. Results showed more support for steps that create incentives or financial savings over regulatory actions or those that could mean costs for residents, according to city data. Responses also showed support for investments in areas like public transportation and energy efficiency that could yield long-term benefits.

The Climate Action Steering Committee has been working on a Community Climate Action Plan for more than a year and has recommended a total of 15 strategies in four topic areas: energy supply; energy use in commercial, residential and industrial buildings; transportation; and waste and materials.

Some of the recommended strategies

An online forum for public comment closes on July 31, marking the final round of public input in developing the plan before it heads to the Council—although public participation will continue on the proposal that the Council winds up considering.

"It's the last opportunity for the public to help craft the strategies," Lacy said.

A public session about the city and community plans with a subset of City Council members will take place on July 30, a new forum meant to provide a chance for Council members, committees and city staff to discuss a subject in a less formal way than through presentations at regular Council meetings. That session will start at 3 pm at City Hall.