The company's cidery building is also located in Tumalo, and now, with the opening of the tasting room, there's plenty of room for cider lovers and newbies to learn about the process. 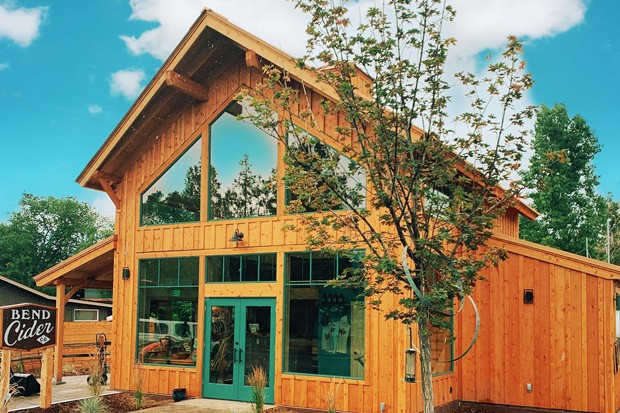 "The most special thing is meeting everybody who's tried our cider. They're coming in because they really like it," Co-founder Tammy Roark told the Source Weekly. For her, one of the best things about opening the tasting room is, "Being able to connect with the public and share our experience of starting this business, and to give people coming in some guidance in tasting a cider, and to understand the sensations."

Inside the light-filled space is room for seating about 32 people. On tap is a full complement of Bend Cider's signature dry, botanically infused ciders—but in order to give patrons the opportunity to try a variety of cider types, the taproom also stocks ciders from other cideries as well. Guest taps currently include varieties from La Familia from Salem and Cyderish from Eugene.

"We wanted to have a variety of ciders," Roark said. "We don't make sweet ciders, but we wanted to make sure we had something for everybody."

Food items in the taproom include a cheese plate, hummus plate and a kids' pack. Outdoors is a patio and lawn, complete with a stage that saw its inaugural show during the grand opening. The Roarks plan to host live music as much as possible; for now, Saturdays are lining up to be the day to see and hear musicians doing their thing. This Saturday, July 3, Tara Snow is set to play.

“It’s important for us to stay connected to the earth and the whole process of growing the apples and pressing them.”—Tammy Roark tweet this

Co-founders Tammy and Kelly Roark started Bend Cider in 2019, after selling Kelly's share in another cider business. Kelly Roark's interest in cider started as a young adult, wife Tammy said. After growing up in a financially challenged household, Kelly Roark wanted to find a way to enjoy drinking on a limited budget.

"He collected apples around town to press with his friends—eventually having the community support him in starting a cider company," Tammy Roark said. Like Bend Cider Company's current offerings, Kelly Roark's creations were on the dry side.

"One day he handed me a cider, but didn't tell me it was cider. I thought it was white wine." Tammy Roark said. "It was my first intro into a cider that wasn't sweet. It changed my whole perception of what cider could be."

Today, the Roarks have completed the planting of two apple orchards; one in Newberg and one in Central Oregon. To continue to grow their business, they hope to plant 100 trees per year.

"It's important for us to stay connected to the earth and the whole process of growing the apples and pressing them," Tammy Roark said.

The Bend Cider Company tasting room is currently open Thursday through Sunday, with plans to expand the hours over time.


Related Hard-ly Drinking: A roundup of the myriad hard seltzers locals are enjoying in 2021