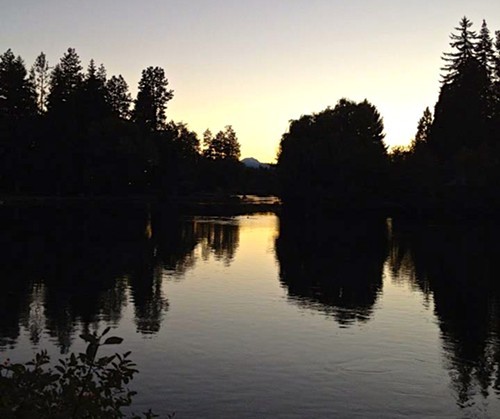 The Bend City Council added its voice to a growing chorus of support for the preservation of Mirror Pond when it voted at the Dec. 4 council meeting to move forward along a pro-pond path and continue discussions with Pacific Power about the future of the dam.

The council's vote lent support to the recent unanimous pro-pond vote by the Mirror Pond Ad Hoc committee (minus committee member Matt Shinderman, who was absent).

During the visitor's section, citizens voiced a range of opinions on the issue, alternately holding the pond up as a quintessential Bend icon and calling for a new, free-flowing era.

Wade Fagen, a Bend native whose family has lived in the area for generations, said that Mirror Pond is a part of the culture his family helped create.

"I would like to see it preserved," Fagen said. "Trying to keep a wild river in an urban city…it just doesn’t make sense."

But Ron Buzell wasn't swayed by Fagen's appeal to history.

"Mirror Pond represents another era. I don’t want it back," said Ron Buzell. "The era of mirror pond is over."

Central to the debate was concerns that public process was being averted.

Barb Campbell showed up with bags of popcorn printed with the statement:

"You paid 1-2 hundred thousand dollars for the illusion of public process. You should at least enjoy some popcorn with the show!"

Councilor Mark Capell, who sits on the ad hoc committee with Councilor Victor Chudowsky, said that the city is not married to a particular outcome and is more concerned with moving the process along.

"What this resolution is about is helping us in our conversations with Pacific Power. If it’s possible, do we want to have a pond? That’s all this question is about," Capell said. He added: "Also, this isn’t the city’s project. We don’t have the bandwidth for it…we’re just trying to help facilitate the project."

Councilor Doug Knight sang the boldest praises for the pond, comparing it to San Francisco's Golden Gate Bridge. He said that citizen efforts to save the pond are a reflection of its iconic status.

The future of the pond is anything but clear. Capell said there are still a number of unanswered questions about what the city can ask Pacific Power to do, and the costs associated with any potential outcomes.

Some are pushing for new, creative ideas, such as a more natural dam, similar to the project underway at the Colorado Dam.

"Do you think there is any chance Bend can move towards a vision of replacing the aging PPL dam downtown with a whitewater park, fish passage, create the missing link of the Deschutes River Trail and a new economic development zone while at the same time preserving Mirror Pond for future generations? Sometimes I wish our city leaders could dream bigger!" wrote Jayson Bowerman on Facebook earlier today, sharing the image below (courtesy of David Kinker).

The image was shown at the council meeting as an example of alternative approaches to the pond dilemma.

"I think we have an amazing opportunity here," Councilor Knight said. "We need to solve these items creatively."

In other council news, a handful of visitors asked the council to help get a measure on the May 2014 ballot addressing the constitutional rights of corporations.

Though the issue was not on the agenda, it sparked a lively debate. The request for support was sparked by the "Move to Amend" movement, which seeks to overturn the infamous Citizens United decision by the U.S. Supreme Court which opponents argue treats corporations like people, granting them undue influence over the political process.

The council was split on whether or not to refer the ballot measure, and opted to wait until Councilor Sally Russell (who was absent) could weigh in.

The council also voted to push back the deadline for the Sewer Extra Strength Program, from Nov. 30, 2013 to July 21, 2014. The committee tasked with creating the new rate structure will present an ordinance for consideration by council at the next meeting. However, the particulars of the program—which will alter commercial sewer rates to reflect the extent to which businesses contribute pollution to the system—are still being worked out.

The next city council meeting is Dec. 18.