Bend Over and Pick Up Project | The Source Weekly - Bend, Oregon

Bend Over and Pick Up Project

Local couple aims to clean up Bend, one bag of trash at a time

It all started after Sydney Dickson's car broke down on Highway 20, on the way back from work in Tumalo. While waiting for a tow truck, Dickson and her boyfriend Jamison Cook decided to fill their time by picking up trash on the side of the road. 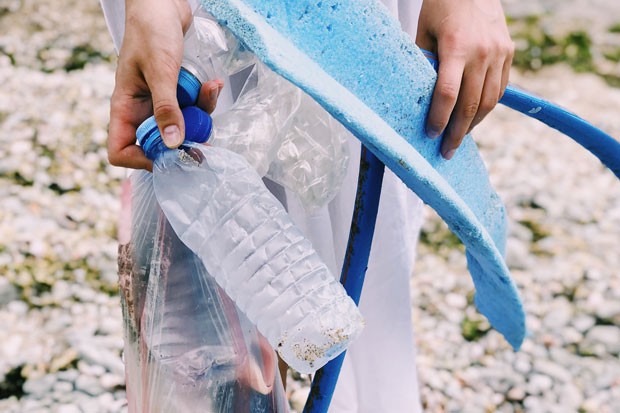 "We were hanging out on Highway 20, didn't have anything to do, and I had some boxes in my car," said Dickson. "It was like, well, we have nothing better to do right now. Let's pick up garbage — and the more and more we were doing it, I was like, I can't stop this."

What started as an altruistic time-killer quickly turned into an idea for monthly trash pickup meetups. Cook and Dickson came up with a catchy name and created an Instagram for the Bend Over and Pick Up Project right there on the side of the road.

Dickson, 20, and Cook, 23, organized the first Bend Over and Pick Up Project meetup at China Hat on Earth Day last month. They're currently asking for small monetary donations to pay for the trash disposal.

"We did just one little stretch, like less than maybe half an acre in China Hat with 10 people, and picked up maybe 15 bags of trash," said Cook.

And once you start looking for trash to pick up, Cook said, you start to notice just how much trash there really is littering trails, campgrounds and public lands. The couple hopes to organize different types of cleanups in the future, including river cleanups by paddleboard, and bike rides around town. Their main goal is to get the community involved in trash pickup and prevention, whether that's through Bend Over and Pick Up Project meetups or inspiring like-minded individuals to organize their own.

"If you want to go out you don't have money for the materials, come to us," said Dickson. "We'll give you a couple bags and some gloves, because even if you can't make it to one of our meetups, we're super happy to help anyone who wants to do it."

The next Bend Over and Pick Up Project meetup will happen sometime this month. Those interested in participating can find more information on their Instagram, @bopuproject, and can donate money through the group's Go Fund Me page to help pay for trash disposal, gloves and other expenses.