Bend Racing Takes on the Eco-Challenge

Amazon Prime's "World's Toughest Race" opens with Bear Grylls hanging on a helicopter, hovering over the jungles of Fiji as he narrates about the tough terrain of the land below. "Steep mountains, sheer cliffs and miles and miles of dense tropical jungle," he describes. Grylls explains how teams competing in the Eco-Challenge will travel 671 kilometers over 11 days, having to pass through a variety of obstacles and challenges to continue on. 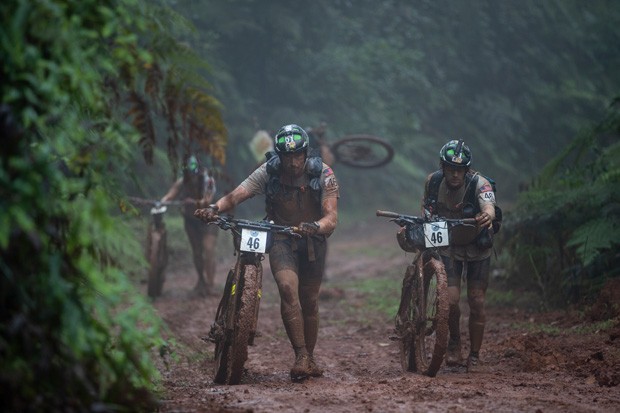 The race starts with 66 teams, some with winning in mind and others just with the hope of finishing. If one member of a team gives up or is injured, then it's a wrap for the whole team. The same fate awaits teams if they don't reach cut-off points in time. Central Oregon's own Team Bend Racing relished the opportunity to compete in Fiji—especially in a race that is so iconic to the sport of adventure racing.

"It's the reason I got into the sport. It was totally a dream of mine since I started. I'm hoping now that we'll be able to be a part of this resurgence," said team captain Jason Magness. The Eco-Challenge form of competition first began in 1995 and had its last race in 2002. Even during its hiatus, the sport of adventure racing has thrived and maintained steady—but now, newer generations of teams and athletes can get a crack at this type of race. And the series revival might inspire some new athletes to take up the sport.

"Our private joke is that we moved to Bend for this sport and to do all this. So now we joke, like everyone else, how no more people should move here. But now even more people are going to know about Bend because of this show," laughs Magness. "We're really proud of the town. Central Oregon is such an amazing and welcoming place for people to embrace the outdoors... and drink beer at the same time."

During episode one, Team Bend found themselves out to an early lead, absolutely cruising through the first two checkpoints after a long paddle. Team member Daniel Staudigel said outrigger paddling is something they focused on—and boy, did that training pay off. But just like any race, things can change in an instant. Shortly after they began their run on land, fatigue set in; Staudigel was overcome with heatstroke, causing the team to slip from first to 58th place.

But unless he was in a coma, Staudigel says the idea of quitting never crossed his mind.

“It became that testament for us to not give up. How do you keep going when everything goes the wrong way? Until we crossed that finish line we wanted to keep pursuing our goals of being the top U.S. team to finish.”— Jason Magness tweet this

"Quitting is off the table. If that's gonna happen, it's gonna be obvious. It would have to be a lot more of a decision than just, 'Dan is feeling bad,'" Staudigel told the Source. "It's never, 'there's nothing we can do.' The options are rest and keep pushing. I was just like 'Tell me what to do and I'll do my best' [laughs]."

So with his teammates behind him, Staudigel and company (Stephen Thompson and Melissa Coombes make up the rest of the team) kept at it, gaining back a ton of ground and moving their team back toward the top section of competitors.

"It became that testament for us to not give up. How do you keep going when everything goes the wrong way? Until we crossed that finish line we wanted to keep pursuing our goals of being the top U.S. team to finish," says Magness. 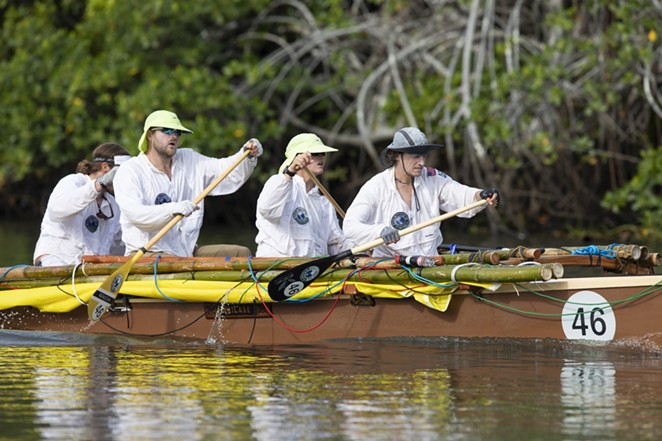 One moment of bliss for Team Bend, after working hard to gain so much ground, came while rafting the Navua River.

"That was one of the times I really turned the corner. After that leg I was back. The river itself is so stunning. Being at the bottom of the canyon was so special," says Staudigel.

Another thing enjoyable about the experience was interaction with the locals and children of Fiji. At one point, a school gets let out early and hundreds of kids come running out to greet the racers.

"We'd think we were getting close to the next transition because these kids were around us, but we'd be running with these schoolkids for like a mile, because they're amazing bushwalkers themselves," recalls Staudigel.

Magness said he's had a fun time watching the series, setting up projector showings in his neighborhood for his family and friends to watch. His wife, Chelsea, is also a member of Bend Racing, so she was eager to see all of what she missed.

"Fiji was different in that yes, it was tough, but it was really fun because of the cultural interactions. We feel like we're in the middle of nowhere and we come out of this jungle and there's people. And they all knew this race was happening. I've never done a race where they've allowed interaction this much," adds Magness. "A good race course is meant to play with your emotions like that."

I won't give a spoiler on where Team Bend Racing placed during the Eco-Challenge, but I will say they met their goals as being the first team from the U.S. to finish in Fiji. To find out how it all went down, watch it on Amazon Prime.

And yes, Bend Racing would love to do the Eco-Challenge again. They already have their applications in for 2021. The destination? Patagonia.