Is there any doughnut phatter than a fritter?

When looking for a doughnut style befitting a winter roundup, the hearty apple fritter seems like the obvious choice. These are usually the largest option in the most impressively grand display cases. They’re bigger in both diameter and height and the chunky appearance serves as sort of an optical Braille that lets you know: this is some serious doughnut. Fritter, like much of the English language, comes from Latin and is applied to anything fried, sweet or savory. The origins of apple fritters lie in Europe where, in modern Christmas markets from Italy to Germany to England, you find stalls that core apples, then slice them horizontally, battering and frying them up before sprinkling with powdered or cinnamon sugar. The result looks more like a traditional American doughnut with a hole in the center, not the doughy monstrosity served in the U.S. That said, the appley, glazed monstrosity can be culinary perfection.

While the reviews of the following five sugar-glazed apple fritters are my own, I mercifully received assistance—and commentary—from six others including young children and young-at-heart adults. The reviews indeed appear in order of our consensus of deliciousness. 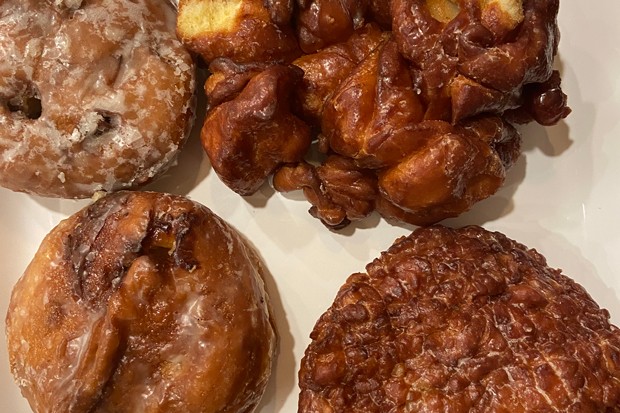 After the last quarterly roundup, it was brought to my attention that I should include Sisters Bakery and thank goodness I listened. While the dexterous dough artists make standard-looking doughnuts, the fritter is a beast. It’s nearly a foot in diameter.

One taster commented, “If an alien came down and asked for a fritter, I’d give them this.” Whereas standard fritters are already craggy, this is downright rough terrain and almost resembles monkey bread the way it beseeches you to pull it apart. Only downside: it could use more apple chunks. While it’s far and away the most expensive apple fritter I’ve ever seen, don’t balk at the price tag since it’s also double the size and can feed two…if not a family of four. $5

Sweetheart’s apple fritter is arguably the template of what an apple fritter is or should be and in turn keeps a fair amount of distance between it and the rest on the list. It’s got the sweet, crumbly icing, the bumpy texture, almost as if a brain had the right ratio of dough to apple bits with reservoirs of icing filling the valleys. And the crispy outside coupled with moist, soft inside that we’ve come to expect, or should expect, of this style. $3.50

This one fared much better among the youngens than the adults, and in all cases the large amount of frosting decided its placement. It also was perhaps the chewiest, which can be a pro or con depending on personal preference, but I’ve come to view the Dough Nut as over-proofing their morsels, thus boosting their height and chewiness. By putting all its eggs in the bonus girth and sugar baskets, it fell short in the flavor department, notably that of apple character. It’s an interesting observation that among this doughnut shop’s two locations—Midtown and west side—its seasonal fritters (think peach, banana, and pear) are the better draw over this year-round apple iteration. $3.

Is it possible this selection was just purchased on the wrong day? We know Richard’s is held in high regard across the doughnutty spectrum, but this more closely resembled an air hockey puck than a true fritter, given how thin it was. The color and texture looked spot-on, but it was panned for being too thin, crumbly, and fragile when a great fritter is marked by its heft.  $2.75.

Oh, how the mighty have fallen. Whereas Delish topped the field in my previous round-up of maple-glazed doughnuts, it fell to the cellar for this fritter. The one area this writer felt it excelled was in their use of pie filling or whatever made it resemble a jelly-filled. At the same time, the gooey apple filling tasted a bit fermented, less fresh. The filling didn’t permeate every bite so it earned low marks for being sugar-forward instead of apple-forward and generally resembling an airy yeast doughnut instead of a dense fritter. $3