These year-round treats scream fall the most

It's a bit of culinary irony that maple syrup is synonymous with fall foods but is harvested during the spring thaw. That said, it's precisely when colder temps set in that maple trees themselves begin to feed on their own sap as a way to provide the sustenance they need to make it through wintertime.

I've been blessed with the opportunity to do a seasonal doughnut roundup, so maple frosted morsels seem like the best direction for autumnal, dunkable delights. Bend may not have as many doughnut shops as it does bike shops or breweries, but no matter what part of town you live in, there's a local purveyor. 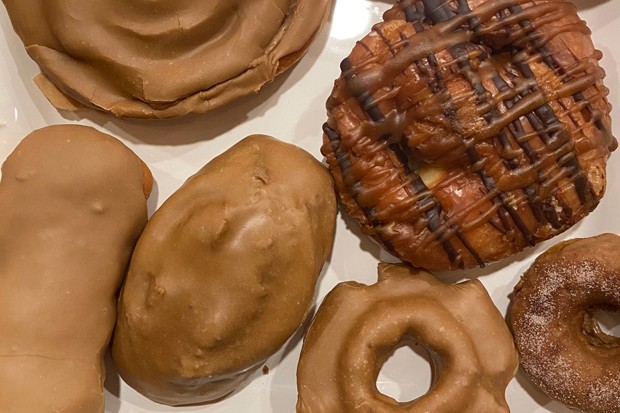 While the reviews of the following eight maple-glazed doughnuts (from all six known doughnut bakeries) are my own, I mercifully received assistance—and commentary—from six others including young children and young-at-heart adults. The reviews, while not ranked on a numeric scale, appear in order of deliciousness.

It's easy to not know about this mom and pop that's been frying dough for over a decade, given that it's not really visible from Highway 97, but if you turn in at Shari's Pies, you'll find the shop with the prototypical display case filled with nothing-but-standards from Bavarian crème-filled to the emoji of doughnuts: the pink frosted/rainbow sprinkled. Most cost $2, give or take, and the fact that there are two full trays devoted to maple-iced long johns connotes how Delish customers find them. From the spot-on sponginess to the subtle note of baking spice in the maple syrupy confection, this was the undisputed crowd pleaser. $1.55.

Seasoned connoisseurs are apt to tell you this is their favorite doughnut shop in town and only a portion of the reason is the sheer variety on display. Given that the theme is maple glazed, it would've been easy to make them all maple bars, but Richard's variety resulted in not one, not two, but three maply munchies. The best-received was the old fashioned. From the rough-around-the-edges shape to the crumbly caky texture, it was a true delight. But we all noted a bright, citrusy note from either the glaze or the batter and it hit the right note. $1.15.


The maple buttermilk bar was among my personal faves, if not the crowd fave. While not superior to the OG glazed buttermilk bar, the hearty fare just goes a bit extra. $1.75.

Comically too large to pass up, this cinnamon roll eschews cream cheese frosting for maple, and if you love sticky cinnamon goo and syrupy sweetness on top, splurge on this. Also of note: they always throw in a donut hole with each purchase $2.95.

Not an actual brick-and-mortar, Chalk to Flour is Kristina Serhan's River West home-based bakery, as approved by Oregon cottage laws. In lieu of mouth-watering racks of treats, donut lovers drool over her Instagram. New on her seasonal menu—everything is always from scratch, oddly rare around here—is the maple pumpkin spice cake doughnut (well, doughnuts, since you gotta order by the half dozen). The cake doughnut itself is super moist and PSL AF. According to me and my son, that was a huge plus. To the others, not so much. $13.50 for six. On Instagram @chalktoflour

Shelbi Blok opened this boutique bakery in 2018 focusing on picture-perfect pastries. The 2013 NYC invention of the cronut has Bend's truest-to-form representation here. I ding it points for being baked, not fried, and the price tag's steep for something that ends in -nut. Perhaps owing to being purchased after noon, instead of light and flaky, it was a bit dense and chewy, yet the light kiss of maple and a deft kick of vanilla (perhaps from the all-white sprinkles) make it worth sinking your teeth into. $3.75

This drive-thru is usually on point so it is surprising how low it placed in this roundup. But my order of a maple bar was sidelined when the maple and chocolate drizzled "pretzel" (that of course a "doughnut twist" just twisted into the shape of a pretzel) caught my eye. Made with delightful-sounding cinnamon butter, perhaps the butter got browned, and too much so at that, because it delivered some burnt flavor. $3

The doughnuts here are always well-intentioned. Maybe they're over-proofed, but the result is an airy, bread-like concoction. $2.

Related You Are What You Eat: Proposed changes to the Healthy, Hunger-Free Kids Act sparks concern amongst local parents

You Are What You Eat
Proposed changes to the Healthy, Hunger-Free Kids Act sparks concern amongst local parents
By Cayla Clark
Local News