While a lot of today's craft beer focuses on the new new, there's always been a thread in beer realizing that what's old is new. When Monkless Belgian Ales opened in 2014, it was the first local brewery to focus on old, Belgian style ales. When Porter Brewing launched in 2018, it became the first local brewery to exclusively brew old, British-style cask ales. And now in 2022, Van Henion Brewing Company is the first to completely focus on old, German-style lagers—actually half-true, since it also makes contemporary American IPAs (but even then vows to not dabble in the ultra-modern hazy or milk sugar driven variants), and debuted in January with its new Helles.

This lager style gets its name from the German word for light or blonde. It harkens back to "beer flavored beer" marked by a malt bill that smacks of fresh baked white bread and just a kiss of grassy hops. And Van Henion Helles Lager is certainly brewed in a rather vintage manner. 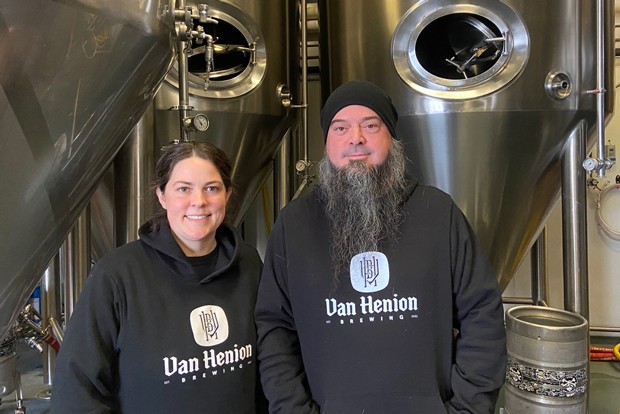 Long before Louis Pasteur observed yeast and its role in fermentation, brewsters and brewers turned to their latest batch of beer and set aside a portion of the mysterious sludge–what we now know is flocculated yeast—to inoculate the next batch with it. So the concept of taking something old from a brewery and using it to make something new within the brewhouse is not new to the industry. Boneyard Beer, for example, simply took that idea to its stainless-steel conclusion by jury-rigging, also called Frankensteining or boneyarding, its overall brewhouse with leftover tanks and kettles from older brewing companies, including Three Floyds Brewing in Indiana, Redhook in Seattle, SweetWater in Georgia, and, most curiously, Bert Grant's Brewery Pub. Founded in Yakima, Washington, in 1982, it was America's first post-Prohibition brewpub. All that equipment, collectively, used to brew 30,000 barrels annually of Boneyard (mostly RPM IPA), but now may see around 3,000 barrels of Van Henion's two initial offerings, Helles Lager and IPA plus forthcoming Germanic beers, in its first year. At least that's what co-owners John Van Duzer, Mark Henion, and his wife Dana Henion, hope to see.

The trio, it should be noted, are not new to the brew system. They've all brewed on it since 2014 when they joined then-four-year-old Boneyard. The trio's careers had all intertwined, starting with Van Duzer and Mark Henion working at then-six-year-old Deschutes Brewery in 1994. Nine years later they both migrated to Cascade Lakes Brewing. In 2011, Mark and Dana met while brewing together at Ninkasi Brewing Company in Eugene. By 2015, they were engaged and moved to Bend just as RPM became the juggernaut it is that necessitated the second, larger Boneyard brewhouse.

When the pandemic hit and seemingly killed draft beer overnight, "Boneyard lost 99.9 percent of our customers," said Mark Henion—and with that, the draft-only Boneyard required drastic help in pivoting to canning beer. Thus, the sale to Deschutes Brewery, where greenhorn brewers Tony Lawrence, founder of Boneyard, Van Duzer and Henion all first met.

As such, the brand-new Van Henion brewery is anything but.

It's not that Van Henion is single-handedly hanging its hat on Helles lager. For one thing, they're not the only Bend brewery to brew the style. GoodLife's Bavarian Lager is also a helles and the German-inspired Prost taphouse always has an imported version available, such as Vollbier Hell from Klosterbrauerei Andechs. Van Henion's forthcoming third release, Dana Henion mentioned, will be a Kolsch—also a light, blonde beer, but pre-dates lagers, so it's a German ale. Soon thereafter we can expect to see a pilsner. But lagers are their heart style. By virtue of taking longer for them to ferment—typically six or more weeks versus faster fermenting ales that can be served two or three weeks after their brew date—brewing only lagers would cut the brewery's annual production capacity from 30,000 barrels to around 15,000.

But just as not all of their beers will be Germanic lagers, the trio of owners/brewers can't deny that we live in the land of IPA—a style you're never hard pressed to find one or more examples of at nearly every brewery in America. As Mark Henion stated, "The consumers will determine."

Van Henion beers are currently available on draft at area retailers such as Broken Top Bottle Shop and Brother Jon's Alehouse as well as in six-pack cans at beer retailers. Seriously, they're like two weeks old and I see their stuff absolutely everywhere. But if you're excited to drink a pint—I neglected to ask if they'd sell by the maß (mass) which is that tall, dimpled litre mug that Germans use—the Van Henion tasting room at the brewery should be open by mid-February.