Ask most Bendites about the identity of their city, and one way they may define it? "Not Portland." While a good portion of recent transplants have moved here from cities including Portland, Seattle or San Francisco, many chose to make the move precisely because Bend was not, in fact, like the places they come from. Bend has its own culture, its own identity and its own sometimes-mystical way of doing things—a hodgepodge of conservatives and liberals and independents looking for a simpler way of life than the one they lived in the iconoclastic cities of the West Coast. Some locals may still look to Portland for a big night out or a shopping trip, but they're happy to leave its dark skies behind most of the year. 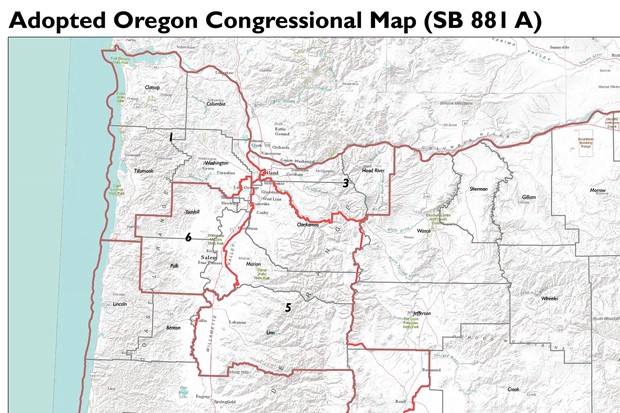 But even while most Bendites know this to be true, it seems the leadership in Salem does not. The Democratic legislators who drew up the most recent Congressional district maps seem to think that Bend is a mini Portland, eager to join the rain-jacketed throngs in being just. like. them. We are applying our non-partisan lens here when we say that by and large, Bendites take exception to the notion that we are like Portland, or that being represented in the U.S. House of Representatives by a candidate who is highly likely to come from the Portland area is in our best interests. Like former Secretary of State Bev Clarno—a Republican and a resident of Central Oregon—we do not believe that the recent re-drawing of Congressional maps that placed Bend in the same district as the Portland suburbs of Clackamas County is in our best interests.

Related New Political Maps for Central Oregon: With Bend’s population boom, Central Oregon was in the center of the drama over where to put the state’s new congressional seat

New Political Maps for Central Oregon
With Bend’s population boom, Central Oregon was in the center of the drama over where to put the state’s new congressional seat
By Hanna Merzbach
Local News

Clarno and several others, in a lawsuit filed this week, say the new lines don't make sense, and more than that, that they violate laws stipulating that new districts are drawn with existing political boundaries or transportation links in mind. With four of the six new districts now including some part of the Portland area, Clarno and company argue that state Democrats purposefully stacked the deck against Republicans.

An Oregon state law bars the creation of districts that favor a single political party—not to mention the federal laws that bar any type of gerrymandering of districts. Clarno and company argue that the 5th Congressional District, which Bend would be part of under the new boundaries, is especially puzzling. We would tend to agree. What similarities does Bend have with the suburbs in Clackamas County? And is there a direct transportation link that geographically unites us? No.

When the U.S. Census numbers that dictated Oregon create a new Congressional district began to emerge, we speculated about how the lines could be drawn. We, like other voters, were tired of feeling unheard in a giant district that stretched across all of eastern Oregon and picked up Medford and Ashland, to boot. We had hoped that Bend, rising in population and prominence, would be a "big fish" in its new district. Being part of Portland's urban mass wasn't part of those hopes.

While we'll watch with interest what the judges tasked with ruling on Clarno's lawsuit decide, one thing is certain: Bend deserves to be represented and represented well. By the time the next census rolls around, the city will have risen in population to rival some of Oregon's other "second-biggest" cities. Giving Oregon's first-largest city (and suburbs) even more outsize influence than it already has is moving in the wrong direction. While partisanship is undoubtedly a factor for Clarno, as well as for the state Democrats who had a hand in drawing the current maps, for Bendites, the concern should move beyond red or blue and instead focus on getting the best representation for our growing city. Lumping us in with Clackamas—where it's highly likely that urban-area candidates will receive more attention for the new seat than anyone from Bend could hope to get—is not that.