Bend's Unlikely Linsanity Connection, or the Delivery Driver Who Sat It Coming 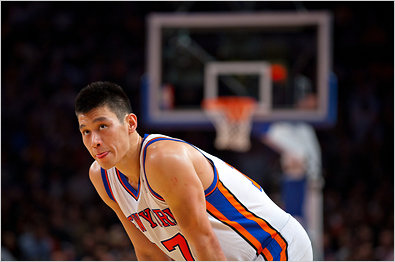 The Wall Street Journal has a story this morning about Bend's unlikely Linsanity connection. For those unfamiliar with Linsanity, you obviously haven't been watching SportsCenter, or even listening to public radio, both of which have offered extensive coverage and commentary around the meteoric and unlikely rise of New York Knick's point guard Jeremy Lin, an unheralded Harvard grad who broke a longstanding NBA rookie scoring record and has been virtually unstoppable as of late. Earlier this week, the Asian-American guard sunk a buzzer beater against the Toronto Raptors that capped a week of jaw-dropping performances. Of course, no one saw this coming, no one that is except Ed Weiland, Fed Ex delivery driver and amateur NBA statistician from right here in Bend who predicted Lin's star potential. Weiland's prescient forecast which was posted a little known basketball website, Hoops Analyst, has been widely circulated in recent week's around the Internet drawing comparisons to Moneyball, according to WSJ, which tracked down Weiland right here in our backyard.

I guess we can now add Weiland to the list of Bend's unlikely celebrities, including the armchair balloonist and the pregnant man.

Thanks to reader Michael Helder who sent the story over this a.m.