The first major storm of the season hit Tuesday, leaving many people with ice-encrusted snow berms blocking their driveways the day before Thanksgiving. But a new pilot project may make "the berm burden" a thing of the past—at least on major arteries in Bend, said Streets and Operations Director David Abbas. This is just one of a number of pilot projects the City is initiating this winter.

After receiving numerous complaints from people blocked in by snowplow berms last year, the City invested in a snow gate that should arrive sometime this month, Abbas explained. The gate attaches to the side of a plow, and operators drop it only when they move past driveways, so the gate can scoop up the extra snow and leave it on the other side. Gates have been used successfully in rural areas, and the department has heard "great reviews" from people who live in rural areas, Abbas explained to the Bend City Council Nov. 20.

"We can't drop it down and go for a long time [blocks or miles]... but we think it will be effective," Abbas said. "We're trying it out in an urban environment: intersections, driveways, bus stops, mailbox clusters... anywhere where we can keep from putting a big old berm in those areas."

Councilor Bill Moseley said the snow gate might be particularly helpful for older people and people with handicaps, because when they get plowed into their homes, they get trapped. Some neighborhood associations have volunteer- and Good Samaritan-programs organized to help people dig themselves out, and resources and contact information is available at bendoregon.gov/winter.

Abbas said the city provided funding for two more seasonal snow removal staff this year who will concentrate on clearing “no man’s lands,” like sidewalks on bridges, pedestrian crossings at roundabouts and priority bike and pedestrian routes. tweet this

"If we get those phone calls and we're not able to sync up help from the volunteer program, we've got a couple of folks dedicated from day one of the storm. They're in smaller pick-ups with a plow, snow shovels and snow blowers in the back," Abbas said. "This year we'll be able to focus on that from the beginning, not after we've been plowing for five or six days."

Abbas said the City provided funding for two more seasonal snow removal staff this year who will concentrate on clearing "no man's lands," like sidewalks on bridges, pedestrian crossings at roundabouts, and priority bike and pedestrian routes. Abbas has also been working with the Downtown Bend Business Association to encourage business owners to clear their sidewalks as soon as possible.

Last winter, the City approved a pilot program banning parking on certain streets (NW Wall, Bond and Broadway, for example) during a declared snow emergency, but never used it. If City Manager Eric King declares a snow emergency this winter, parking restrictions would likely go into effect at night for a 12-hour period or until the snow is cleared curb to curb, Abbas explained. The emergency declaration will be displayed on the City of Bend home page. If cars need to be towed, drivers will not be charged.

Abbas' crew will eventually roll out another pilot program: an app allowing people in Bend to watch plowing progress in real time. Redmond has one up and running, but Abbas explained the technology is cumbersome to launch because of the synching requirements between GPS and local geographic information systems. While it won't be ready this winter, the department currently tracks all of its drivers and it will begin using a new software system this season to help move along the process.

This year, all contract plow operators will be assigned the same zone for the whole winter in hopes they'll take ownership over the area. The department will send inspectors out early to catch areas that new drivers might have missed, Abbas said.

The major priorities during a storm are the main arterials through the city, Cascades East Transit routes and safe routes to the hospital, schools and businesses. Residential streets are cleared later, sometimes after the storm leaves the area, Abbas said, and the department can't provide an estimate of when it will plow specific roads. When a big storm hits, the department can quickly determine what else needs to be done from inside their "incident command center" where they have screens displaying zones, drivers and routes.

As the department prepares for another storm season, Abbas hopes people in Bend understand the importance of parking off the street when the snow falls, so plows can completely clear the roads.

"And we want to get the word out to be a good neighbor," he told City Council. "If you know someone that is elderly or disabled, help your neighbors out."


Ice and Snow: The More You Know

City and county officials have been hard at work all week clearing snow—but they’re not the only ones responsible for getting the job done. According to the City of Bend Code 5.35.020, snow must be shoveled and ice must be removed from public sidewalks within six hours of daylight after the snowfall (24 hours in residential areas).

Failure to comply can result in a Class B Civil Infraction in commercial areas, and a Class C Infraction in residential areas—though since it’s a complaint-based system, the only way to ensure your neighbor does their part is to remind them to do so—or to call to complain.

While clearing sidewalks is something of a bare-minimum level of courtesy, here are several other winter-specific laws to keep in mind.

Chain law: This law applies to all state highways. Posted signs either require drivers to carry chains in case of adverse conditions, or put them on before continuing to drive. Those caught without chains may accrue a class C traffic violation. (Those with 4WD or traction tires are exempt.) The Oregon Department of Transportation suggests practicing chain installation before traveling in the snow.

Studded tire law: Studded tires are legal in Oregon from Nov. 1 to March 31—and those caught using studs before or after this window will be subject to a fine of up to $200. ODOT recommends that studded tires only be used in harshly icy conditions; otherwise, they may cause costly road damage. ODOT also notes that winter tires are more effective than all other options, including studs and chains. 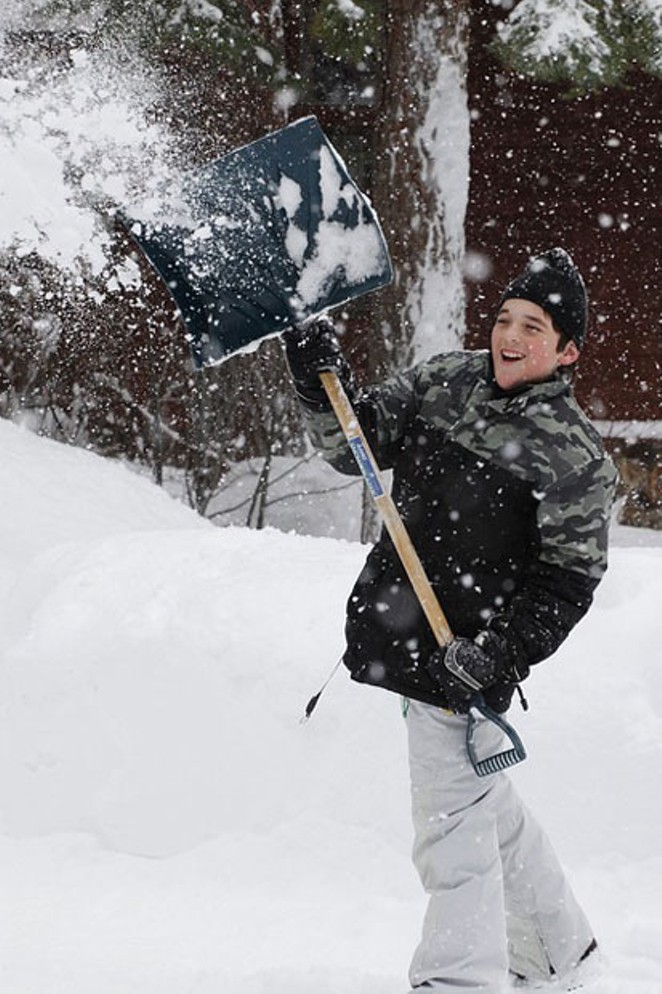 Driveway snow law: It’s illegal to shovel snow berms back onto the road if they’re blocking a driveway. ODOT suggests berms be shoveled to the side of the driveway. If they’re shoveled back into the road, the offender may be billed for removal (if the city gets to the excess snow first), or cited with a misdemeanor.

Sno-park law: Sno-Park permits are available through the DMV (and at several local businesses), and pay for snow removal at winter recreational areas. Those caught parking without a permit are subject to a $30 fine.

Snowplow law: It’s illegal—and dangerous—to pass a snowplow on the right when driving on state highways—and a car could get hit with rocks and other debris. ODOT suggests staying three car-lengths behind to avoid vehicle damage.

Pay attention to winter-specific laws – failing to do so could result in serious fines.