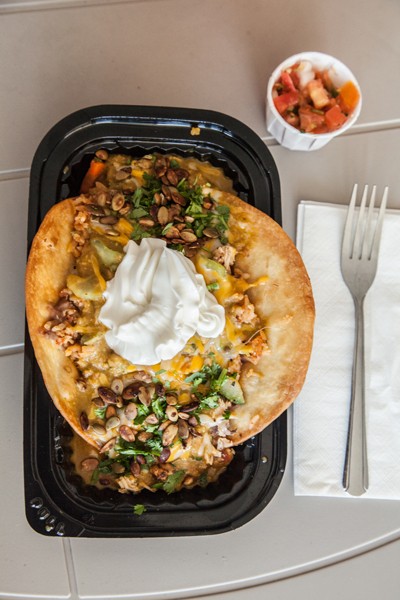 For 19 years, Gene Fitzsimmons has been making mole. Every Monday at the Taco Stand, he cooks up his special recipe and slings the daily special for not much more than the cost of a mass-produced failure of a foot-long Subway sandwich. A local's favorite and still mostly cash-only (they'll take your card if you're desperate for a taco but prefer real money), old-school establishment, Taco Stand is tucked away in the web of residential neighborhoods just beyond downtown.

After Mole Mondays, the rest of the week consists of fish tacos, pork tacos, carne asada and mole verde, a featured special for every day, none made without some serious love and attention from Fitzsimmons. A 70-hour work week is normal, he said.

That's part of what has kept the restaurant afloat for nearly a quarter of a century, and under his command for two decades. That, and its undeniable ability to crank out delicious, simplistic, reasonably priced Mexican food. And just like the food, Fitzsimmons' goals for the Taco Stand are simple.

"I like to have fun when I'm at work," said Fitzsimmons. "I like to keep the atmosphere light, it keeps everybody motivated. The most important thing is to give people a good product with the best service, at the best possible price."

Mission accomplished. Bean rice and cheese burritos and tacos start at $2.75. Meat or veggie enchiladas are $2.50 a pop (although we advise eating about four to fill you up), and daily specials never stretch the budget. (BB)