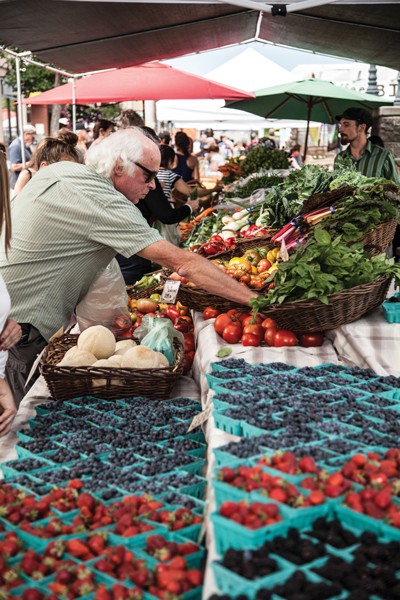 There's nothing quite like biting into a sweet, tender peach picked at the height of ripeness. It's a rare treat in a world where most grocery store produce ripens on a truck as it travels thousands of miles from the orchard to the chain store. At the Bend Farmers' Market, fresh, local, and organic are the rule, rather than the exception. Started in 1999 with just five local farmers, it has grown to more than 40 vendors in its 15th year. While produce comprises the bulk of the market's offerings, the weekly summertime shop also offers meats, cheeses, and baked goods.

The Bend Farmers' Market brings together Oregon producers from across the state—as close as 10 minutes away and as far as 3.5 hours. And though it may not be the first such market in the state, Market Manager Katrina Wiest says it is likely the most established and the longest running in Central Oregon. Bendites have grown fond of the market—which sets up in the Brooks Alley every Wednesday from June to October, from 3 to 7 pm—because "They're making healthy lifestyle choices and wanting to support local," Wiest says. And the market gives back with its Farm to School program, providing farm-fresh produce to Bend-La Pine schools during the school year, as well as supporting the summertime free lunch program. (ER)