With the quelling of a major fire, air quality in Central Oregon expected to improve

An air quality alert from the National Weather Service expired at noon on Monday, bringing an end to a hazy weekend of unhealthy air quality in Central Oregon. Temperature drops are expected from the high 90s of the weekend into the 70s by midweek.

Fire officials hope the lower temperatures and increased humidity will improve visibility and air quality but warn that fires are still just a spark away. 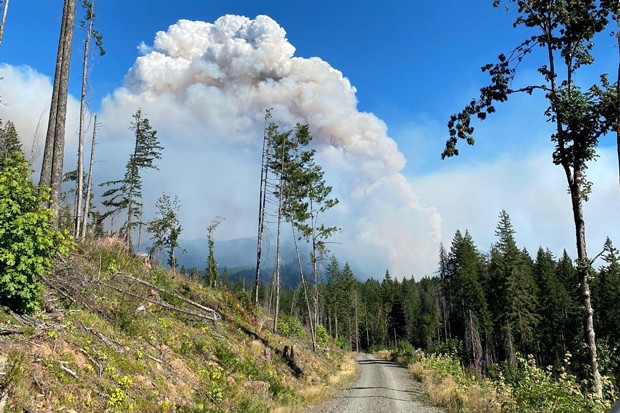 "We are at our highest level of industrial fire precaution levels. So, no firewood cutting, no anything with an open flame," said Jean Nelson Dean, Deschutes Forest public affairs officer.

The Middle Fork Fire in Lane County ignited under these circumstances and is currently burning on over 9,000 acres and is only 7% contained. On Aug. 10 Oregon Gov. Kate Brown invoked the Emergency Conflagration Act in response to the Middle Fork Complex Fire.

"As we are in the middle of another very challenging fire season, now is a good time for Oregonians to make a preparedness plan and get 2 Weeks Ready," said Brown. "A good first step is to sign up to receive emergency notifications by visiting oralert.gov. I encourage all Oregonians to understand wildfire risks, pay attention to fire restrictions and be sure to check in with friends and family members who may need help to get disaster prepared."

The Middle Fork Fire continues spreading as the Bootleg Fire, for a time the largest fire in the United States before being surpassed by California's Dixie Fire, reaches 100% containment. The Bootleg Fire raged for 39 days and torched over 413,00 acres before reaching 100% containment this week. The Dixie Fire was burning on nearly 570,000 acres as of Monday, according to CalFire. Another big fire, the Grandview Fire near Sisters, burned over 6,000 acres in late July and is now 100% contained.