Roasted chicken recipes to spice up a scaled-down holiday dinner

Crook, Jefferson and Deschutes counties are among the 25 counties falling under COVID-19 "extreme risk" status, which means holiday gatherings indoors and out must be kept to six or fewer people from no more than two households. But people can still stay safe this season without going full Scrooge. Keep this year's holiday guest list tight—and the season bright—with a scaled down main dish of roasted chicken.

I like to dry-brine my chicken, spatchcock it (a hilarious and fancy way to say "butterfly it") and then roast it in a cast-iron skillet following the roasting method in America's Test Kitchen's recipe for Crisp Roast Butterflied Chicken. To dry brine: Pat a fresh whole chicken dry with paper towels and then rub it down with salt—getting under the skin on the breast and thighs. For a 4- to 5-pound chicken, use about 2 or 3 tablespoons of kosher salt. Then let it brine for two days in a covered container in the fridge.

The day of your gathering: Follow the cooking instructions in the previously mentioned recipe. ATK includes a video (https://youtu.be/tvLvPEYlzF0) that will walk you through every step. This approach calls for preheating the cast-iron skillet in the oven. Don't skimp on that step—it's the key to crispy skin. Also, I find that roasting a 4- to 5-pound chicken usually takes 40 minutes breast-down and 15 to 20 minutes breast up, a little longer than the times ATK suggests. When the chicken is done, rest it for 15 minutes uncovered. Tenting with foil will ruin that crisp skin.

For spices, anything goes, and this is where to really make the recipe your own. ATK recommends rosemary. Classic. But if you winter party like I winter party, you want something really warming. I recently roasted a chicken for a weeknight dinner with the following rub, and it turned out great. Rub the spices all over the chicken and under the skin.

Now, I'm just a home cook, standing before an oven, asking it to love me. So, I reached out to the pros at Sisters Meat and Smokehouse for chicken advice. They said to estimate about 1 pound per person for anything bone-in, including chicken, and reiterated the importance of brining.

This approach calls for preheating the cast iron in the oven, and then leaving it there once at temperature for half an hour. Don’t skimp on that step—it’s the key to crispy skin. tweet this

"One, it will help add flavor," Austin Heiser, smoke house manager at Sisters Meat and Smokehouse, told the Source. He says the main thing it does is keep the meat moist and the skin crisp.

"Typically, when you're cooking chicken, you want to cook it to 165F, and if you cook it over 175F, that's when it really starts to dry out," Heiser said. "The brining process will help it stay moist. It will give you a little more of a buffer."

Admittedly, he prefers a wet brine. And for you wet briners, he says to brine for 24 hours. But don't go over 48 hours or it will become too salty, he said.

"I set it at about 350F and cook it for about 45 minutes," he said, adding that exact cook time depends on the size of the chicken. "After that, I'll [take the temperature of] my chicken in the breast and thighs once it gets closer. Once it hits 145F, I take off the lid and turn the oven up to 450F until the chicken hits 165F internal temperature. Turning up the temperature will help it crisp up the skin," he said. 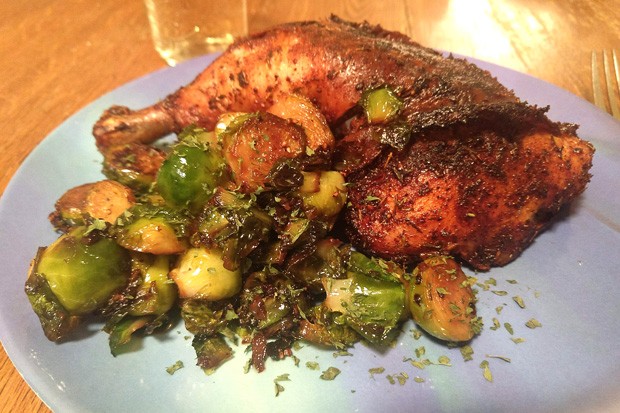 If chicken isn't your thing and you want to try a roast for a smaller group, he had some other suggestions.

"You could do a small prime rib—like a two-bone prime rib will feed four to five people," Heiser said. "Another one that I like to do that is super easy is a chuck roast. For that, you can either make it in the Crock-Pot or a Dutch oven. I like to season it just with salt and pepper. And I like to score it and put crushed garlic cloves in it and onion."

If you go Dutch oven, cook it for about four hours at 350F, he says. If you're team Crock-Pot, then cook it about four hours on low. Either way, he says to put about an inch of water in the pot to keep the roast moist.