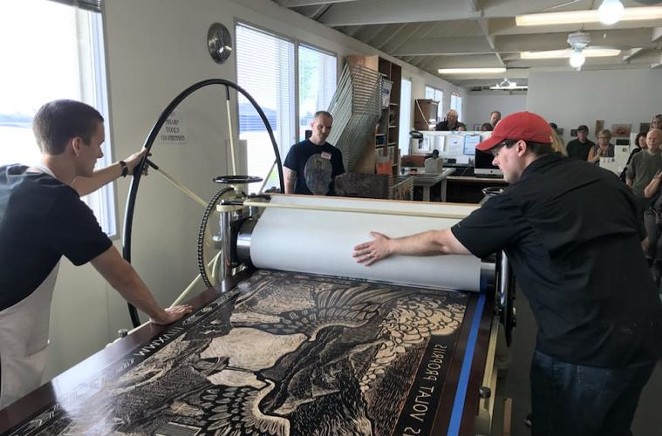 If you missed the first Big Ink that came through Bend Art Center last month, you get a second chance! These amazingly huge pieces, which in scale are each approximately 24 inches by 36 inches in size, are made from large woodblocks. The result is breathtaking. The collection, created in Eugene this past summer during a Big Ink program at WhitPrint Studio, is the work of artists from around the country. The large scale of the prints is magnificent and allows you to really truly see the amazing work that goes into woodblock printing. Do not miss this!

This month, The High Desert museum is showing photographs by Edward Curtis, an American photographer whose work from the early 1900s focused on the West and the lives of Native Americans. For Curtis, his lens on the lives of Native Americans often romanticized their culture while wildly ignoring their fate and treatment by the United States government. At the time his photos were being taken, Native Americans were being pushed onto reservations and their children taken from them and put into boarding school so they could assimilate into a "white" world.

High Desert Museum is acknowledging this side of Curtis' work, while still allowing us to see and appreciate these iconic images. They're showcasing his photographs of Native Women while also showcasing the beautiful traditional craft work of Native Women alongside his photographs. While we live in a world where we often hear the phrase "cultural appropriation," and have conversations around it, The High Desert Museum is actively addressing these historical errors by illuminating them and honoring the voices not included in the past. By allowing the work of Native Americans to be shown alongside the iconic images taken of their ancestors by a white man, we are able to give our full attention to this beautiful culture and see what we can learn from all of it.

BIG INK II By Her Hand